Since he was 10, Matt Taylor loved two things: sports and radio.

After experiencing those high school Friday night lights, the 2008 grad knew he wanted to continue with his football passion into his college years, but he also needed a school that would allow him to pursue a career in radio. 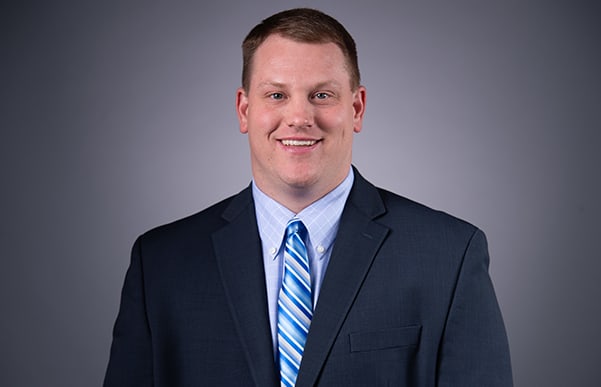 Plunging into college, Matt searched for opportunities to train in football and radio as early as his freshman year. He asked himself, “What do I need to know to pursue this as a career if I want to make this a viable option for myself after college?”

His first step was to dive straight into sportscasting work. Matt admits his first radio broadcast did not go as planned, but he did not allow his first fumble to deter him.

Instead, he created his own radio show to give himself more chances to grow.

“I turned to the men’s basketball team. We had a coach’s show on Monday nights. We had a recap of the latest game, a preview of the upcoming game and a player interview. I mean, nobody was ever doing that before Franklin. But those are the things that I knew guys were doing who were in the positions that I wanted to be in. So, I just tried to copy and emulate that.” – Taylor

Matt’s show was a first for Franklin College. This broadcast became like another class for Matt. He devoted hours to studying the Franklin College and opposing teams’ stats. Every game was his Super Bowl and he wanted to be prepared for it.

While navigating the world of radio broadcasting, Matt received help from his friend and professor Joel Cramer.

“Joel was incredibly encouraging. He had to temper my expectations on a lot on things because I had a lot of grand ideas and things I wanted to do. But he never tried to deter me from anything. There was a lot of things that Joel taught me in terms of perseverance and determination that obviously helped me get to where I’m at right now.” – Taylor

Right now he is working for the Indianapolis Colts, where he serves as the voice and radio broadcast manager for the NFL team.

From training to the end of the season, Matt is constantly prepping himself to discuss football. Whether he’s preparing for his daily show or revving up for game day, he uses a lot of the skills he gained from his time at Franklin College — researching, producing, writing, etc.

“Franklin College really was a huge launching pad. Had I not gotten all the hands-on experience, I’m not sure that it would have stoked my fire as high, to be honest with you. Franklin College afforded me a lot of opportunities, and I took advantage of them big time.” – Taylor

At Franklin College, students can forge their own paths and even create an individualized major, all while have one-on-one support from faculty.