As a biology major, Spencer Wesche didn’t always understand why she needed to spend hours typing out a character analysis for the indignant titular character from Richard III. Sure, Shakespeare is important to English majors but was understanding Richard’s plight relevant to someone who wanted to work with animals? Maybe more than you think. 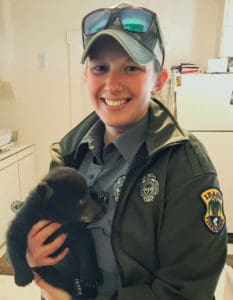 After graduating from Franklin College in 2017, Spencer landed a position at Idaho Fish and Game. Before she even officially began her job, her training time brought along challenges she had been prepping for – just not in her biology classes.

“Franklin, being a liberal arts college, required me to take speech and English classes, and taught me how to be a good communicator. That’s a huge part of my job. Similar to being in law enforcement, a lot of the work is just knowing how to diffuse situations.” – Wesche

Those communication and empathy skills are crucial when dealing with her non-furry patrons. In fact, Spencer remembers one disgruntled man who was miffed over a ticket. “It was an infraction, so not a huge deal. You pay it and you’re done – no court appearance. He was an older man, but he just freaked out on us. He lost his temper and was acting like he was going to get aggressive towards us. When the older man was talking to my training officer, the situation was escalating and escalating. I stepped in and was able to talk to the guy and explain it to him. He completely calmed down. We were able to get out of there. No handcuffs. Nothing like that.” – Wesche

Thanks to those classes that inspired her to view the world from different perspectives, she could empathize with the man’s annoyance. And she knew relating to the man would humanize herself to him as well.

“Being able to talk to people effectively is a huge part of my job. So, having that background from Franklin and taking those classes and knowing how to do that stuff that is incredibly valuable. It’s kind of what I talked about most in my job interview, and it’s what Idaho was looking for: people who can communicate effectively.” – Wesche