When Franklin College alum LaDarrius Calvin first began thinking about a career, he saw himself as a strength and conditioning coach for the NFL. So how did the 2014 graduate in health science end up as vice president of Boys II Men, a non-profit agency helping middle school boys develop skills in responsibility, respect, education, community service and accountability? He said it’s all about connections.

“I was a fly on the wall and Franklin basically allowed me to step out of my shell. The biggest thing about Franklin is the connections that you make. When you have a relationship with a professor, they can teach you and hold you accountable, even for your personal goals.” – Calvin 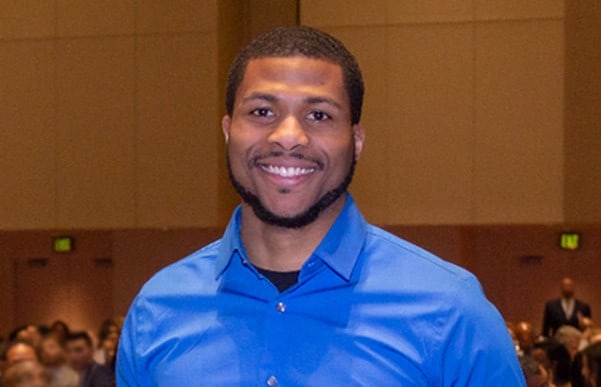 Calvin, who played football at Franklin, lists Mike Leonard, football coach; Angie Walls, math instructor; Jenny Fry, former new student coordinator; and Katie Wehner, dean of academic success, among the many faculty and staff who helped him along the way, often going above and beyond expectations.

“When I came to Franklin College, I was very shy. I didn’t put myself out there. One day Katie Wehner pulled me aside and talked to me about becoming a new student mentor. I really hesitated because I wasn’t social. She saw leadership potential where I didn’t.” – Calvin

He eventually accepted the position, which led to other leadership positions and internships.  While at Franklin College he was the social chair in Lambda Chi Alpha and help start the Brothers-to-Brothers program. He interned at Decatur Central High School, Franklin Community High School and Paul Quinn College in Dallas, Texas, working with students on strength and conditioning.

It was at Paul Quinn that he realized his passion was to help people and it didn’t necessarily have to involve sports. Struggling with a young female basketball player, who didn’t want to do the workouts, he asked her to give him one week of dedicated workouts with the idea that if it didn’t improve her game, she could walk away. She accepted his offer and did the work. When he walked in late to her next game, the usually sedate home team crowd was on their feet cheering her on as she ruled the court. The team was winning and that wasn’t their norm!

From this experience Calvin realized his career needed to be about giving back and making a difference in people’s lives, regardless of where that might lead.

“My drive for doing this work stems from the people who were there for me. I want to do this work to pay that back ten-fold.” – Calvin

As the vice president of Boys II Men, Calvin is a life coach and a counselor for 7th and 8th-grade boys at Beech Grove Middle School, helping them assume more positive behavior. For his work in Boys II Men and work with the Starfish Initiative, which pairs high school students with mentors who are college graduates, Calvin was awarded the Up and Coming Achiever award in 2019 from the Center for Leadership Development.

While his initial approach with these youth was to talk to them and describe his own experiences, he’s learned along the way, that you first have to listen and develop trust.

“As a Christian, I’ve learned that you can’t get people to trust in God if they can’t trust you. You have to get them to trust you, then accept them for who they are. Then, you can get them to listen to you and follow your instructions.” – Calvin

He also uses this approach in his second job as the director of football player development for Franklin College, where he helps students remain diligent on the field and in the classroom by connecting them with resources they need.

“The connections that I made at Franklin College helped me stand out. It is one of those things where I feel so blessed that I just need to bless someone else.” – Calvin