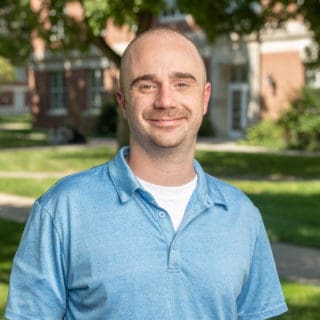 “A student should leave a literature course with a mind better prepared to engage with an increasingly distracting and perhaps unsettling world of change. Because literature draws special attention to the complex meaning-making processes at work in any use of language, the critical thinking skills developed and practiced in our courses are uniquely applicable to the various careers and civic engagements students will undertake within and beyond the college’s walls.”

How are students taught to approach literature in your courses?

While I design my syllabi around specific authors and texts, I always seek to illustrate for my students the limits of any single systematic approach when facing the ambiguities, ambivalences, paradoxes, and ironies of literature. Because of such complexity, reading literature closely prompts ethically-engaged thinking: the literature course brings students together within an interpretive community, and I encourage them to seek consensus of interpretation where there might be none possible. Together, we work to recognize the difference between literary “facts” or “data”—the words written on a page—and their “meanings,” and I often remind my students that while researchers in other disciplines might agree upon the “facts” of a specific data set, they will debate what that data suggests, what meaning it makes. Students learn that to account for the specificities of any given literary text requires some adjustment of their critical lenses. In doing so, they learn to be critically adaptable.

Can you give an example of an assignment sequence from one of your courses?

In a course on folklore and fairy tales, an early activity involves understanding the difference between story and “discourse”–story defining what a narrative says, discourse the way it is told. To begin, students work in groups, with each group writing a brief summary of “Little Red Riding Hood,” no more than five sentences long. We then come together as a class and attempt to generate a common understanding of the tale, which I outline on the board. At this point, students are often surprised by the slight variations of the story they have each inherited: according to some students, Red visits a store, to others she delivers food between her mother and grandmother, and for still others she never even leaves the house. We note these slight variations while simultaneously developing our own “authoritative” version of the tale.

Students are then assigned two versions of the story: Charles Perrault’s 1697 moral “Little Red Riding Hood” and James Thurber’s 1940 retelling, “The Little Girl and the Wolf.” Having read the texts, students write about the specific ways each text reflects or diverges both from each other and from the outline we were able to generate together as a class in a Moodle forum, responding to one another’s posts. How does Thurber adapt the story of Little Red? What’s different about the way Thurber writes the tale, and how do these changes alter the meaning of the story? For example, why is it significant that Thurber begins from the perspective of the wolf rather than the village girl? Having practiced comparatively analyzing Perrault’s and Thurber’s texts in the forum, students then write a longer paper comparing two versions of a fairy tale of their choosing.

In my spare time I…

In my spare time, I shoot hoops, watch baseball, and read to my cats. This year I would like to spend more of my spare time pretending to learn to cook.