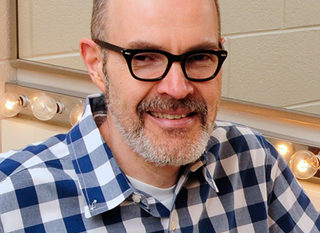 “Getting involved in the theatre program during my junior year at Clemson University was a transformative experience for me. I hope to be part of that experience for students at Franklin. In the classroom I strive to make learning engaging, meaningful, and fun.”

As a generalist, I teach Script Analysis and Theory, Playwriting, Theatre History, Acting II, Public Speaking, Dramatic Literature, and direct at least one production a year. And for the past few winter terms I have taught a course on Alfred Hitchcock films.

What are the benefits of participating in theatre at Franklin College?

Because of our size, students become an important part of the department of theatre as soon as they arrive on campus. They work collaboratively with the faculty. Our productions are opened to all students, regardless of major, and theatre gives you many valuable, transferable skills—working independently as well as in a group, managing your time, solving problems creatively, meeting deadlines, and thinking quickly on your feet.

Is it easy to major in theatre and something else?

Yes! If fact we encourage students to select a minor, and the theatre major lends itself very easily to a second major. In addition to majoring in theatre, students have also majored such things as psychology, political science, English, creative writing, music, and journalism

“Robin is delightful. He is consistently available and happy to help if you have any concerns. You can count on his classes to be engaging, and I always learn something new.” – Emily Meese ’16

Something My Colleagues Don’t Know About Me

I was named after the baseball player Robin Roberts who was a starting pitcher for the Philadelphia Phillies and Baltimore Orioles.