NOTE: Audience members will be required to wear masks regardless of vaccination status.

The Importance of Being Earnest

Written in 1895, this popular and endearing comedy follows the exploits of friends, Jack and Algernon, who concoct elaborate deceptions to engage their love interests, Gwendolyn and Cecily. Their carefully arranged schemes fall apart with the arrival of the formidable Lady Bracknell. What follows is a merry tangle of mistaken identities and witty banter as multiple love stories play out simultaneously with great charm and humor.

Join us for this festival of short, comic plays, which will feature the work of senior theatre (and biology) major Cameron McAbee. You won’t want to miss what will certainly be a hilarious time in the theatre.

In this comedy, two new moms from vastly different financial backgrounds have one thing in common, the love they feel for their newborns. Their friendship is tested when a third mom tries to make the duo a trio, with mixed and surprising results. The play takes an honest look at the absurdities of being home with a baby, the power of female friendship, and the effect class has on parenthood in America. This production is made possible by the Richard A. Harrison (‘57) Visiting Theatre Artist Endowment.

Shaleeha G’ntamobi has written a new play about an alcoholic Black mother and her son trying to get out of the projects that has been accepted to the country’s top theatre festival. The problem is Shaleeha doesn’t exist. It’s the nom-de-plume of aspiring white playwright Danny Larsen who created her in an effort to increase the chances of his play being recognized. Lies pile up as Danny must decide what to do before everything blows up in his face. NOTE: Audience discretion is advised.

The plays will be performed in the Théâtre Margot, which is located in the Johnson Center for Fine Arts on the Franklin College campus . Traveling west on State Road 44, take a left onto Forsythe Street. Turn right onto Jefferson Street, following the sign to the main entrance to the college. Turn left onto Branigin Boulevard. The Johnson Center for Fine Arts is on the left at the second stop sign. 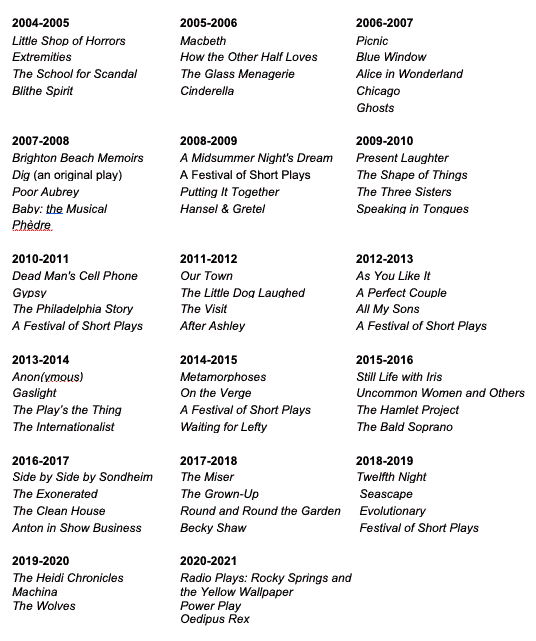