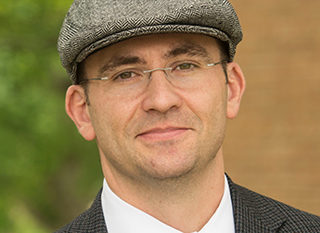 “I want my students to understand that language is both powerful and empowering. The foreign language classroom can become a place of transformation where students move beyond what they presently know, confront preconceived notions of their place in the world, and challenge themselves to travel, both intellectually and geographically.

Why did you decide to become a professor?

As you can see from my education, I was in school for a long time. The truth is that I love being in the classroom, and I love reading. Why would I not want to become a professor? Teaching in college means that I have the opportunity to dedicate myself daily to the practice of life-long learning. Indeed, I am constantly seeking to develop new courses that bridge multiple disciplines. In my time here at Franklin I have taught courses on detective fiction in Latin America (SPA 331), philosophical ethics (PHL 220), coffee and chocolate (Winter Term in Guatemala), crime and violence in Central America (LAN 300), psychoanalysis and serial killers (WIN 298), gender expression and fashion (IHE 100), and chess (WIN 209). Teaching at a liberal arts school provides so many opportunities for interdisciplinary work and transformation that I cannot imagine doing anything else.

What type of teaching approach do you use in the classroom?

My teaching approach varies from course to course, and from semester to semester. My approach depends greatly on the students in the class and their learning needs. Always, though, I try to conduct myself as a facilitator of learning and less as a dispenser of knowledge. In my philosophy and upper-level literature courses, I generally devote class time to discussion and debate, as I believe it provides greater opportunity for critical thinking and engagement with the texts. In language courses, I generally employ a communicative approach to language learning. I try to simulate real-world situations that create an environment for creative inquiry and experimentation with the target language. I push students to use circumlocution when they encounter linguistic barriers in order to demonstrate the plurality of creative means for expression.

“A Prophetic Vision: Faith and the Grotesque in Flannery O’Connor’s The Violent Bear It Away.” Conference on “Epiphanies of Beauty: The Arts in a Post-Christian Culture.” University of Notre Dame. November 2004.

I am a devourer of books and, with Borges, have “always thought of Paradise / in form and image as a library.” I will read (and re-read!) anything and everything. I could never pick just one favorite. However, so as not to avoid the question entirely, some of my favorite authors are probably Jorge Luis Borges, Neil Gaiman, Donna Tartt, Franz Kafka, Gabriel García Márquez, Friedrich Nietzsche, Robert Jordan, Flannery O’Connor, J. D. Salinger, Fyodor Dostoevsky, and Cormac McCarthy, though not necessarily in that order. I tend to like books that are a little “off.” I like books that subvert and undermine, that problematize vision and language, and that force me to look at the world differently. I like books that make me think…and wonder.