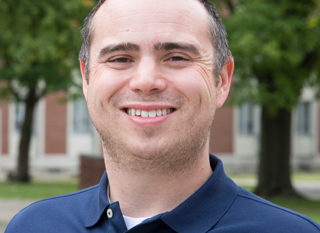 “My teaching philosophy has always centered on a single element: accessibility to my students. Successful office hours are opportunities to invite and discuss questions and concerns. Powerful advising isn’t simply registering students for classes: it is being a career consultant, damage controller, long-range planner, financial planner, mentor, and/or friend, depending on what the situation demands.”

Do you value undergraduate research?

Participation in undergraduate research is a special priority for our department. There are curricular experiences that can be found in MAT 345: Statistical Consulting Project, where students work in teams with a local non-for-profit to solve a real-world problem, or in CMP 473: Senior Seminar, where students design and implement their own software creations. There are also independent studies that students do with faculty mentors, and these projects can yield results in the forms of papers, publications, and/or talks at professional conferences. Recent undergraduate researchers at Franklin have given talks at the IN-MAA Spring Meetings, the Butler University Undergraduate Research Conference, and Franklin College Math Day.

Can you double-major in mathematics and another discipline?

Actually, quite a number of our mathematics majors are also majoring in another discipline. Some of the more popular second majors include business, computer science, secondary education, software engineering, chemistry, and economics, but we’ve also had double-majors in journalism and political science. Moreover, many of our student have minors in a diverse set of disciplines, including the ones above and studio art! At Franklin we believe that your study of mathematics and computing is part of a larger educational experience, and we encourage study in a wide range of disciplines.

Distinguished Service Award (2021), Indiana Section of the MAA
Dietz Award for Faculty Excellence: May 2016, Franklin College – The highest faculty award given at Franklin College. It recognizes outstanding teaching, scholarship, and service.
Legend of Castle High School: March, 2016 – An award for outstanding achievement from my alma mater.

Student Activities Coordinator for Indiana MAA: Summer 2010 – Spring 2016 – I was elected to the position of student activities coordinator, a position on Indiana’s executive board of the MAA. My responsibilities are varied, but includes include managing the Spring meeting’s Indiana Collegiate Mathematics Competition and organizing student workshops at the Spring meetings.
Young Mathematician’s Conference (YMC): Summer 2014, 2013, 2012, 2011 – I was a judge for the YMC, meaning I read through a list of abstracts from all applicants, scoring them based upon a conference standard. This conference focuses on undergraduate research in mathematics.
WeBWorK Workshop: Summer 2013 – I participated in a four-week workshop on WeBWorK, an online homework program that we use extensively at Franklin. The workshop focused on developing and authoring our own problems. The workshop was funded by the MAA.

“Dr. Gash goes above and beyond to work with his students and show that he cares about not only their education, but their overall well-being.” – Derek Linn ’12

“Dr. Gash has the unique ability to make learning fun. I always looked forward to his classes as I knew that there would be laughs, but that I would also walk away with a solid understanding of the day’s topic.”  – Hilary Hauguel ’11

In My Spare Time…

I enjoy playing poker. In particular, I enjoy playing No-Limit Texas Hold’em. I am a fairly conservative player, and I can be bluffed off hands easily; but I’m also disciplined, so I tend to hang around a while and give myself a chance to win. I’m also a big Cubs baseball fan and Colts football fan.

Currently I am reading the book Reasonable Faith by William Lane Craig, research philosopher and doctor of divinity at Houston Baptist University. While I find the book a great defense of my Christian faith, I also think it is a great example of the value of a liberal arts education. The book connects the worlds of religion and formal logic – the Humanities and the Sciences – to create an essay people can apply to their everyday life.