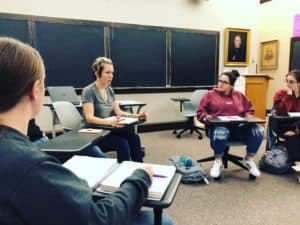 The power to make change rests with each of us, whether we are inspired by something we read or we write something that prompts action. That is one of the themes instructor of English Kellie (Chittick) Schmidt ’02 aimed to convey when she began formulating her Immersive Term course, “Help Increase the Peace: Exploring Prejudice, Privilege and Power.”

Schmidt knew it was important to find community partners whose perspectives could help enrich class discussions and make student learning relevant to real-world issues. She found the perfect partners in the Indianapolis-based Peace Learning Center, renowned for its programs on conflict resolution and social justice, and graphic artist Erin (Ashbrook) Davis ’04, an active Franklin community leader and volunteer. They helped engage Schmidt’s students in talks and exercises about privilege and how to be allies to those in underrepresented groups.

Davis, for example, was inspired to design a yard sign promoting love and positivity in response to divisive political signs and Confederate flags she saw in Johnson County in 2016. Initially, she printed 18 signs with the words “Love More” layered over a rainbow-colored sunburst and sold them at cost simply to help spread a positive message, but the demand quickly exceeded supply. That prompted Davis to consider how to further the community impact. She now sells a variety of merchandise to benefit charities that help people.

“Erin’s story is a good example, since a lot of people simply don’t know where or how to start,” Schmidt said.

Schmidt and Davis engaged Franklin students in discussion, then action, to advocate for art education in Indianapolis Public Schools (IPS), many of which have undergone budget cuts that eliminated art programs. The domino effect is problematic, said Davis. “Art is an outlet for kids. It’s a form of therapy, it’s been proven to improve behavior in class.”

With guidance, Franklin students developed “art class in a box” prototypes for donation to second- and third-grade classes. Each included supplies a teacher would need to lead an art history lesson, including the biography of an underrepresented artist and a hands-on project for students.

Franklin students also called IPS officials to voice the importance of an integrated arts curriculum. “We wanted them to look outside of themselves and see how people are affected by inequality,” said Davis. “It’s really important to have empathy for the community at large.”