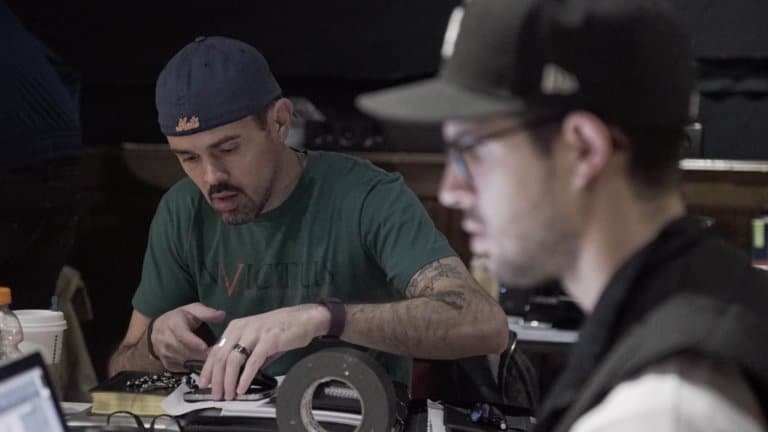 When Franklin College associate professor Gordon R. Strain took a hiatus from teaching theatre during the winter of 2015 to serve as production designer for the film The Good Catholic, he hoped it would someday  debut locally. His hope has become reality. The movie makes its nationwide release on Friday, Sept. 8.  It will make its Indiana debut in Bloomington, where it was filmed, on Sunday, Sept. 17 and in Franklin at The Historic Artcraft Theatre on Wednesday, Sept. 27 at 7:30 p.m.

The feature-length romantic comedy features veteran actors Danny Glover (Lethal Weapon, The Color Purple) and John C. McGinley (Scrubs, Platoon) as well as Zachary “Zach” Spicer, a Greencastle, Ind., native. The film, rated PG-13, was produced by Pigasus Pictures, a New York-based film company, co-owned and operated by Spicer and friend John Armstrong. Their friend, Paul Shoulberg, wrote the film, based on the true events of his parents’ love story. His father was a priest when he met and fell in love with his future wife.

Another tie the film has to Indiana is David Anspaugh, director of the iconic films “Rudy” (University of Notre Dame football) and “Hoosiers” (Indiana basketball). Anspaugh is The Good Catholic’s executive producer.

Strain, a Franklin resident, relocated to Bloomington so he could be easily accessible during the filming, which began last January.

He also used the filmmaking opportunity as a way to engage students in learning. He invited broadcast journalism major Ian Mullen (Miamisburg, Ohio), now a 2016 graduate, to be his production design assistant, and he secured a non-speaking acting role for sociology/criminology and theatre major Kiera Shackelford (Merrillville), currently a senior. Strain also enlisted the help of Franklin College General Trades Technician David Piland (Franklin) during the set design and received assistance from Director of Athletics Kerry Prather (Franklin). All of them will be mentioned in the movie credits.

Join Us for Our Black History Month...