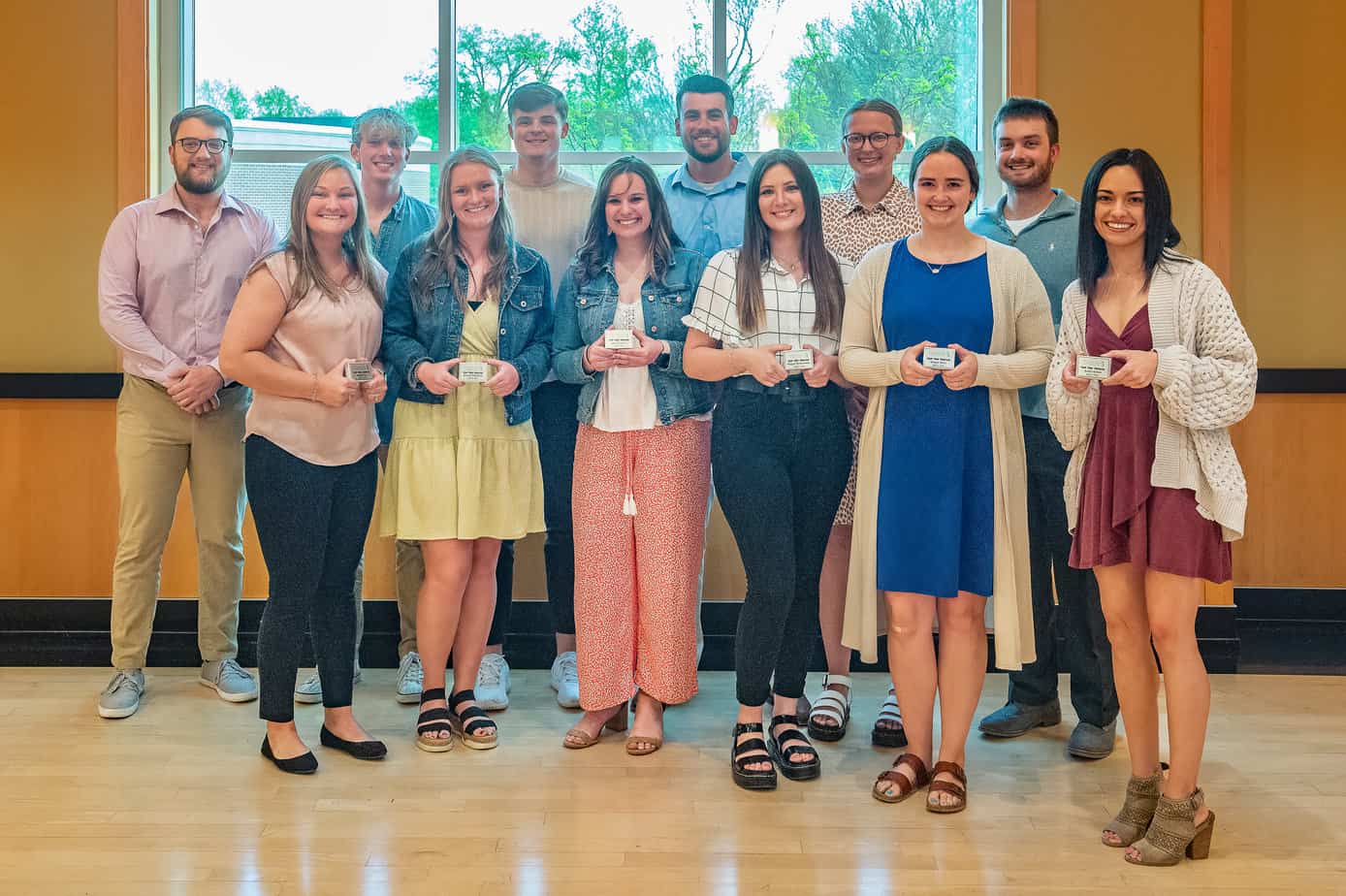 Franklin College bestowed several awards at the Annual Student Involvement Awards ceremony on April 27, 2022. One of the highlights of the event was the unveiling of the “Top Ten Seniors.” The recipients are chosen based on their academic excellence (a minimum of 3.0 GPA); leadership on campus, both inside and outside the classroom; and their embodiment of the FC values. Due to a tie, the awards were presented to 12 outstanding seniors this year.

The following students were recognized as the “Top Ten Seniors”:

Kameron Buennagel, son of Kristy Brown of Greenwood and the late Dean Buennagel, majored in business (management and marketing). While at Franklin, Buennagel was a member of the Economic, Business and Accounting (EBA) Club and Delta Mu Delta Business Honor Society. He also served as a resident hall assistant for three years. Buennagel’s future plans include working as a market analysis and working toward an MBA and law degree.

Abigail Davis, daughter of Jeff and Tessy Davis of Seymour, earned a bachelor’s of art degree in elementary education. While at Franklin, Davis served as a member of the Student Entertainment Board (SEB) and was involved in Intervarsity Christian Fellowship. She also served as a resident hall assistant.  Her future plans include teaching at the elementary school level in Seymour.

Brynne Newland, daughter of Scott and Angela Newland of Bloomington, earned a degree in elementary education, graduating summa cum laude. In addition to being selected as a Top Ten Senior, Newland’s classmates also voted her to represent the Class of 2022 as the Senior Commencement Speaker. Newland was a member of Pi Beta Phi sorority, Panhellenic and Delight Ministries while at Franklin. She also served as a student mentor and a resident hall assistant. She was inducted into Alpha Society, the Scholastic Honor Society of Franklin College. Newland was named a Woman of Distinction award winner and 2022 Sorority Woman of the Year. Her future plans include teaching elementary school in Bloomington.

Abby Scheumann, daughter of Tom and Ann Scheumann of Greensburg, graduated with a degree in business management and a minor in accounting. While at Franklin College, Scheumann was involved with Pi Beta Phi sorority, Panhellenic, Economic, Business and Accounting (EBA) Club and Bold + Blue Studio. She was inducted into the Order of Omega Greek Honor Society and Delta Mu Delta Business Honor Society. Scheumann’s future plans include working at Slyfox Creative, a graphic design and creative services company in Greenwood.

Lauren Spina, daughter of Victor and Amber Spina of Martinsville, graduated with degrees in business management and business marketing. While at Franklin College, Spina was a member of Zeta Tau Alpha fraternity, serving as treasurer; Panhellenic, Riley Dance Marathon, serving as treasurer; and was a member of the Franklin College Cheer Team. She was inducted into Alpha Lambda Delta Freshman Honor Society. During her time at Franklin, Spina gained valuable professional experience by interning as a marketing event specialist with the Indianapolis Zoo.

Other awards presented at the program included:

Jason Jimerson, Ph.D. received the Faculty/Staff Service award for his contributions to the quality of student life outside of the classroom. Jimerson is a professor of sociology, and serves as the chair of the sociology department. He has been employed at Franklin College since 2002. Jimerson is a resident of Greenwood.

Kea Deppe received the Academic Adviser award for providing outstanding guidance in educational goals. She joined the Franklin College team in 2020 as an instructor of education. Student nominations for Deppe cited her encouraging nature and her ability to make all of her students feel as though they are family as reasons for her selection. Deppe resides in Franklin.

Christian Moody, Ph.D., received the Student Organization Adviser of the Year award for providing outstanding contributions to the Apogee, the Franklin College literary journal. Moody joined the Franklin College team in 2019 and is an assistant professor of English and creative writing. He resides in Indianapolis.

In addition to the “Top Ten Senior” Award, Annie Coy was also presented with the Student Entertainment Board Outstanding Member of the Year award for providing outstanding contributions to Franklin College.

Padgett “Paige” Hedger was presented with the Student Congress Service award for her outstanding contributions to the college. Hedger, a sophomore, is a double major in English and economics. In addition to Student Congress, she also was a member of Model UN, Neuroscience Club and the Women’s Swimming & Diving team. She is a resident of Cold Springs, Ky.

Kylie Brattain, a sophomore from Shelbyville, received the Student Congress Vice President Gavel award. She is also a member of Student Entertainment Board, Education Club and serves as a resident hall assistant.

For more information about Franklin College, please contact the Office of Communications at (317) 738-8185.