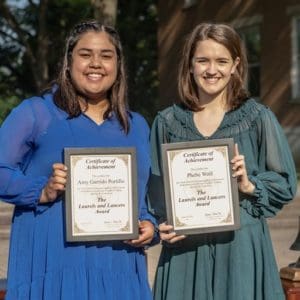 From left to right: Amy Garrido Portillo and Phebe Wolf

Each year, two outstanding sophomore students are recognized for their first-year academic and campus-community achievements. Recipients are chosen by vote of the faculty.

As award winners, Garrido Portillo and Wolf had the privilege of signaling the start of the academic year by ringing the ceremonial college bell. They each received framed certificates as keepsakes, and their names are engraved on the Laurels and Lancers Trophy, which is on display at the college.

“Amy and Phebe are excellent role models for our incoming class,” said Kristin C. Flora, Ph.D., vice president for academic affairs and dean of the college.  “Each has taken full advantage of what Franklin has to offer – honing their leadership skills as Launch mentors, participating in co-curricular clubs and Greek life, and excelling in rigorous academic programs in political science and biology, respectively. I look forward to seeing their continued contributions to our campus community.”

Garrido Portillo is the daughter of Rafael and Dulce Garrido of Greenwood. She is a political science major with a pre-law focus. During her first year on campus, she was involved as a staff writer for The Franklin, the student newspaper; served as a delegate for the Model UN Team; assisted as a Spanish tutor in the Academic Resource Center; and worked part-time in the Office of Career Development. She also participated in a journalism class taught by “ABC News” anchor and reporter Linsey Davis, culminating in a trip to New York City in May to visit the ABC studios. Academically, she achieved a perfect 4.0 GPA both semesters, earning her a place on the President’s List.

Garrido Portillo’s hard work was recognized at the Honors Day Convocation with the Montell Ogdon International Law & Diplomacy Endowed Scholarship and the Spanish Service Award. Over the summer, she interned at the Immigrant Welcome Center through the Indiana Latina Institute.

Wolf is the daughter of Phillip and Julee Wolf of Somerset, Ky.. Entering Franklin College, Wolf was named a Ben Franklin Scholar, receiving the college’s full-tuition scholarship. She is a biomedical sciences major and participates in the pre-pharmacy program. As a first-year student, Wolf joined Zeta Tau Alpha Fraternity, and was elected as the chapter’s director of philanthropy. She also served as a student ambassador for the Office of Admissions.

Wolf earned academic distinction on the President’s List (4.0 GPA or higher) during the fall and spring semesters. She was awarded the Biology Department’s Most Outstanding Performance Freshman Year Award at the Spring Honors Convocation. She gained future experience over the summer by working as a pharmacy technician at Lake Cumberland Regional Hospital.

Both Garrido Portillo and Wolf were selected for the college’s Intercultural Honors Experience, a prestigious Undergraduate Research Seminar, and they were both chosen to serve as Launch Mentors for incoming first-year students during the 2022-23 academic year.