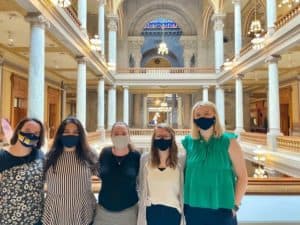 In 2006, Pulliam School of Journalism (PSJ) Director John Krull ’81 had a recur­ring problem as student newspaper adviser; the reporters kept interviewing their roommates. Nothing he assigned pushed them out of their comfort zones. He knew things had to change to enable their professional development.

“I don’t know what I envi­sioned,” Krull said, but he figured getting students away from their campus environment was a logical first step. “I had a friend who offered us office space in downtown Indy.”

The initial agreement was for one month, over the College’s Winter Term (now Immer­sive Term). At the new space, Krull began sending students across town to report on Indiana Statehouse activities and asking they return to produce news stories on the same day. The students distributed the stories free to media partners who in exchange for use agreed to publish their bylines and credit Franklin College.

“Students seemed to enjoy it, and they seemed to grow from it because they learned in that pressurized environ­ment,” Krull said.

Initially, PSJ offered the bureau only over Immer­sive Terms, but newspapers statewide said they wanted coverage to continue and would pay for it. Krull real­ized there was a journalistic need and a student oppor­tunity that a larger scale program could address.

With his responsibilities as PSJ director and journalism professor pressing, Krull also recognized the bureau needed a distinct adviser.

“John was looking for some­one to take over running the bureau, and he wanted it to go full time,” said Lesley Weidenbener, currently editor of the Indianapolis Business Journal (IBJ) and formerly a Statehouse reporter for Kentucky’s Courier Journal. The College hired her in 2011 as The Statehouse File’s inaugural executive editor.

“I had only wanted to be a reporter at that point. I had never thought of being an editor,” Weidenbener said. “It created a whole new lane for me to think about, and gave me a ton of new skills. Working with students was just an inspiring thing. I absolutely loved it.”

The bureau has evolved with a change in location and additional news delivery tools. Headquarters today is at the Indiana Statehouse, in a room which students share with the Press Corps. The bureau itself is now a digital powerhouse encompassing a website and multiple social media accounts. In 2011, The Statehouse File was among Indiana’s first news outlets to imple­ment a paywall, a method that restricts access to content for those without a paid subscription. Media partners statewide sub­scribe to use the articles, photos and videos that Franklin College students produce. The content helps media cover stories that would be out of reach with solely their own resources.

“We wanted the students to understand what they’re doing has value, and we wanted people reading to understand there is value they should pay for,” Weidenbener said. Both goals remain today.

Erica Irish ’21 started as a reporter with The State­house File in her sopho­more year and rose to the Russell Pulliam Student Editor position her senior year. Through Statehouse reporting, she became the first Grizzly on record to win the Society of Profes­sional Journalists Student Journalist of the Year award.

“Being a journalist for The Statehouse File increased my capacity to act quickly, think on my feet, be adapt­able and figure it out,” Irish said. “That’s been hugely beneficial for me in the career I’m in now.” She is a marketing partner for Innovatemap in Indianapo­lis, and an Orr Fellow.

The Statehouse File has grown from five media partners in its infancy to 35 with subscriptions today. The program also has begun a new partnership with The Indiana Citizen, a nonpartisan, nonprofit platform dedicated to increasing the number of informed, engaged Hoosier voters. Any student can participate as an extracur­ricular activity, semester-long course or a full-immer­sion experience, based on their interests and career goals.

Colleen Steffen ’94, current executive editor, follows several outstanding women who previously held the role. There was Janet Williams, whose back-ground was in corporate communications for Cummins and reporting and editing for The Indianapolis Star, and Rachel Hoffmeyer, now a deputy chief of staff and communications director for the Indiana Secretary of State.

One aspect of Steffen’s advising role that differs from predecessors is the COVID-19 pandemic. Since she accepted the position in January 2020, nearly every day has involved helping students navigate new ways of reporting via Zoom, livestream, phone and six-foot distances.

“It’s not easy,” said Steffen. “Every piece we create is going out to a real audience and can go through dozens of revisions. Sometimes ours is some of the only state political news reaching Indiana’s news deserts; these are big, important stories affecting real people’s lives. And politi­cians are not the easiest to talk to!”

“In that environment, I watch these students explode in skills and confidence. It is a real privilege to be a part of.”