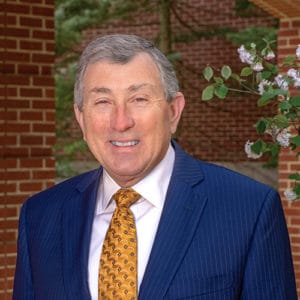 Prather was appointed acting president in January 2020 and president in February 2020, with his term originally slated to end in June 2022.

“The Franklin College Board of Trustees recognizes that President Prather has provided unity and stability, transparent leadership, institutional vision and community collaboration during his presidential tenure, all of which are needed in today’s challenging higher education environment,” said Board of Trustees Chairman James V. Due. “He has done a remarkable job, including the navigation of COVID-19. The extension of his presidential term is a reflection of the Board’s confidence in his continued leadership and commitment to advancing the college.”

“I am honored and humbled by the confidence of the trustees, alumni, faculty, staff and students, and I am excited to continue leading this great institution,” Prather said. “Franklin College is a special place blessed with extraordinary people. I look forward to the exciting work ahead as we continue to ensure a bright and promising future for the college and its students.”

Prather has served in various capacities during his 39 years at the college, including as a member of the Cabinet through four administrations. He previously served as acting vice president for administration and acting vice president for enrollment management, after beginning his career at Franklin in 1982 as an assistant men’s basketball coach.  He was promoted to head coach in 1983 and took on the additional role of athletic director in 1990. He is a graduate of Indiana University with an undergraduate degree in English and a master’s degree in education.

During his tenure as the college’s 17th president, Prather has led the way in establishing the college’s Center for Tech Innovation and the Johnson Memorial Health Athletics Annex; launched a competitive esports program on campus; and created a digital fluency initiative that serves as the capstone to the already transformative education Franklin provides. His leadership has earned the confidence of Lilly Endowment Inc., with the college being awarded a $1 million grant in 2020 to help strengthen technology integration and expand learning opportunities. He also led the college to its most successful fundraising year ever in 2020 in the midst of a pandemic.

Prather’s wife Cindy is also an educator who served as a faculty member in the Franklin College Education Department for 23 years, including as department chair, before transitioning to higher education consulting. Their two children, Katie and Robbie, are Franklin College graduates in the classes of 2013 and 2017, respectively.