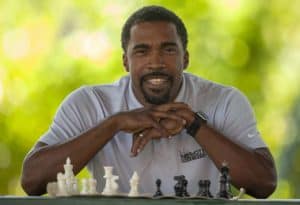 Yuri Smith, organizer of the eight-week community Chess in the Park event, said he grew up surrounded by drugs and violence, and chess saved his life.

Growing up in Indianapolis’ Riverside neighborhood in the 1990s, Yuri Smith ’06 knew he had to be home each night before the streetlights came on. While the rest of the kids on the 2100 block of Sugar Grove Ave. continued to play outside, he was in the kitchen with his uncle, sitting behind a chessboard.

It kept him away from the drugs, alcohol and violence pervading his neighborhood and gave him critical-thinking and decision-making skills in return. As the founder of Indy Inner-City Chess, Smith hopes to impart the same skills upon youth today.

Smith considered himself fortunate growing up. “I was one of the few people in my entire neighborhood who had both my mother and my father in the house. We were poor, but I didn’t feel like it because I was surrounded by so much love and support.”

His mother worked as an administrative assistant while his dad cared for Smith and his two brothers, one of whom had disabilities and could not live independently.

Outside of Smith’s home, however, he saw a once-thriving historically Black neighborhood on the decline. In the 1980s, factory jobs either left or downsized. After he became a teenager, Smith recalled kids dropping out of school to sell drugs and police “sweeping in and locking people up.”

His uncle sat him down one evening and said, “Nephew, I’m going to teach you how to play chess.” Smith was 8 years old. By the time he was 10, he could beat his uncle and, at 13, he won his first super national chess championship at a tournament in Knoxville, Tennessee. Brebeuf Jesuit High School offered Smith a scholarship to continue playing chess, but he turned it down, his only regret in life, he said.

He went to Emmerich Manuel High School to focus on sports instead, then with scholarships and other aid attended Franklin College, and played basketball for the Grizzlies. Chess took the background in Smith’s life for almost two decades until he was hired as a program administrator at Indianapolis Metropolitan High School. While there, he ran into an old friend coaching the chess team, decided to help coach and won a trophy at the first tournament they entered together. That is when he realized the game is a tool that can reinforce life skills.

“Chess can save people’s lives,” Smith said. “It gives students some symbolism to life.”

Learning to own the outcome of a chess play is a great tool for learning to own the consequences of decisions made in the real world, Smith said. It also forces players to think before they act, a skill that many people like the kids he grew up with did not have, he added.

In 2014, Smith founded Indy Inner-City Chess to expand his outreach. In 2019, other organizations approached him about spearheading a Chess in the Park series. The fall of 2021 marked the third time that Smith in conjunction with leaders of Aspire House, Northwest Community Resource District Council, Cleo’s Bodega, Indianapolis Metropolitan Police Department and the Near Northwest Neighborhood hosted the eight-week public series, which routinely pairs chess lessons with food and music.

“It was meant to not only bring attention to the (Frank Young) park, but also to bring people from the community together,” Smith said.

In addition to instructing chess, Smith works as the health center manager for Eskenazi Health in Indianapolis. To connect with Smith about ways to engage, go to innercitychess.com.