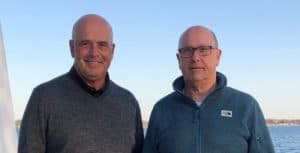 Many graduates have memorable stories about their college journey, but Keven Crawford ’75 may be the only one who can say a flat tire rerouted his, and gave him the chance to help recruit a future College Football Hall of Famer to play for the Grizzlies.

Keven and his brother, Brad Crawford ’78, D.D.S., grew up north of Indianapolis, in rural Winamac, Indiana, where they recollect being “surrounded by corn and soybeans in all directions.” Hunting and fishing were two of their favorite pastimes, and sports were a significant part of their lives. Keven lettered in five high school sports, and Brad lettered in four.

Winamac Community High School’s first time fielding a varsity football team was coincidentally Keven’s senior year. He played quarterback and defensive back, and the team enjoyed a winning season that left him wanting more time on the gridiron. When a friend attending college in Alabama on a basketball scholarship encouraged Keven to visit and check out the football program, the timing was perfect. Keven liked what he saw, and he succeeded in making the team and earning a college football scholarship.

Back home in Indiana for the summer, he took a job with a mowing crew to make extra money before reporting to football camp. On a day he was dispatched to mow along Interstate Highway 65, south of Indianapolis, a flat tire tractor brought his work to a halt. He loaded the flat in his truck, headed down the interstate to find a repair shop and took the first exit he saw, No. 90, to Franklin. When the mechanic told Keven the wait would be a couple hours, he decided to go for a walk, and that led him to the Franklin College campus.

“I’d never been to Franklin College before, but I quickly found the football stadium and went in for a closer look. That’s where I made acquaintance with Coach Faught.”

Stewart “Red” Faught, now deceased, was talking with a maintenance technician near the north end zone. When he spotted Keven, he came to offer assistance. After Keven discovered Faught was the head football coach, their conversation ignited.

“I learned he had played quarterback at Indiana State University, and I remember him talking that day about the ‘run and shoot offense’ he coached at Franklin, meaning they threw the ball about 40 times per game,” said Keven. “That was virtually unheard of back then, but Coach Faught’s philosophy was something like, ‘If you’re not supposed to throw the ball, then they would’ve put sand in it.’”

Time passed quickly as they talked, and it was soon time to retrieve the tire. They parted ways, and a couple of months later Keven headed south to football camp, where he learned the head coach who signed him was transitioning to another college. A couple weeks later, another disappointment came for the defensive back who suffered a severe groin pull.

“I pushed myself to keep playing, but that only aggravated the injury. My injury also started affecting my relationship with the coaching staff. My instincts told me I needed to leave that college so I started to think about my options,” Keven recalled.

Finding a college closer to home and family was high on his list, and Keven’s thoughts kept circling back to Franklin College, more specifically Coach Faught.

“Even though we hadn’t talked for long the day I ran into him at the stadium, he came across as very genuine. We both obviously loved football, and there was just a strong connection,” Keven recalled.

Eventually, Keven wrote Faught a letter explaining his change in status. When Faught promptly wrote back, indicated he remembered the day they met and encouraged applying to Franklin College as soon as possible, Keven was “pleasantly surprised and encouraged.”

“He said if I made it into the football program and performed well that a scholarship* would be available. I trained hard, and he came through with it a short time later. Coach Faught was a man of his word. His integrity and treatment of others are two of many reasons he’s deserving of having the Franklin College stadium named in his honor,” Keven said.

“He worked very hard at maintaining positive relationships with everyone around him, and observing how he conducted himself was truly a learning experience. I think many of us tried to emulate Coach Faught after we graduated and worked on advancing in our respective careers,” Keven said.

Brad set records in his high school’s long jump competitions and qualified for the state track championship, where Faught went to watch him compete. Faught was so impressed he offered Brad a track scholarship. He also highly encouraged Brad to play football, even though he had some concerns about the lightweight.

Keven said, “I told Coach Faught he would have a different opinion after seeing Brad in a full-contact scrimmage, and he did. Brad’s quickness and his ability to break on the ball and close down on a receiver were amazing, and I remember getting a thumbs up from Coach Faught after he saw Brad play.”

Another example of mutual trust and respect between Coach Faught and the Crawford brothers traces back to a 1974 game against Georgetown College. After a knee injury in the previous season, running back Steve DeVore ’77 made his highly anticipated return to the field only to reinjure his knee. Faught needed a replacement immediately, and he delegated Keven.

“I was the strong safety on defense, and I’d never run an offensive play at Franklin so I didn’t know the plays. I told that to Coach Faught, and with that self-confident smile that anyone who ever knew him will remember, he said to me, ‘Don’t you know I know that Crawford? You’ll be fine.’”

“I remember lining up in my stance behind the quarterback, Joe Bath ’75, and asking him which direction I was supposed to go for pass blocking. With every running call, Joe had to tell me in the huddle what I was supposed to do. I was on sensory overload from trying to absorb my new assignments, react in real time to the play call and take the handoff without fumbling. That game was very intense.”

Keven’s most vivid memory is of the confidence Faught showed in him.

“That exchange between us still gives me inspiration, especially when I’m not feeling very confident about a situation. It’s one of the things Coach Faught did as a mentor that I came to truly appreciate later in my life,” Keven said.

The Georgetown game also was significant to Brad’s football career. When starting cornerback Larry Edmond ’74 broke his hand, Brad, then a freshman, stepped up and executed masterfully. He was a starter in every game thereafter.

Ask Brad about that game, though, and he’ll tell you about the three rushing touchdowns that landed Keven in the Franklin College Football Record Book.

“To make those plays and never have practiced in the running back position is truly an incredible accomplishment, and keep in mind that he also played on defense. As Keven’s younger brother, I also take pride in him being appointed team captain his senior year. Even with damaged cartilage and ligaments in his right foot, Keven helped lead our team to a winning record,” Brad said.

Keven added, “In full disclosure, I’m actually tied with two others in that single game touchdown record. Ron Doyle ’74 (now deceased) did it four times, and Joey Pasquale ’15 did once. Regardless, my record hardly stands up to Brad’s overall athletic accomplishments at Franklin.”

Brad is a member of the National Association of Intercollegiate Athletics Hall of Fame (’86), Franklin College Athletic Hall of Fame (’89) and the College Football Hall of Fame (’00). According to the latter’s website, Brad’s “forte was speed, a talent he utilized to run back kickoffs and intercept passes.”

He anchored the Grizzlies’ defense four consecutive years as a starter and set the College’s record for interceptions in a season with nine in 1975; Mike Brouwer ’97 tied in 1995. The Grizzlies also named Brad football MVP three times, and he graduated holding career records for interceptions, 25, and kickoff return average, 25.9 yards. He earned NAIA first-team All-America honors three times.

“It meant a lot having Coach Faught and Coach Chiarotti at my Franklin College Football Hall of Fame induction because they had a huge impact on my college experience,” Brad said.

After Brad’s senior football season, a scout for the Baltimore Colts visited Franklin to discuss a possible tryout. Brad respectfully declined because he had been accepted already to the Indiana University School of Dentistry. The choice has enabled Brad to run a successful dental practice in Winamac for more than 40 years.

Although Keven has lived in other states throughout his long career of providing transportation solutions for individuals with mobility challenges, he still calls Winamac “home base.” In fact, a local company that employed Keven as a teenager to assemble wheelchair scooters and van lifts introduced him to the industry that launched his career. Throughout college, Keven worked part time for the Winamac-based company, and he transitioned to full time after graduation. He helped the company grow in the mid-1970s by earning business from the Veterans Administration and Department of Vocational Rehabilitation, whose procurement processes included bid requests for customized mobility products to help their clients.

“Their bid requests were like prescriptions, and I had taken kinesiology and related courses at Franklin so I understood the anatomical terminology. It enabled me to help put together bids that factored in all the special equipment and modifications required to fulfill a specific request. In retrospect, my Franklin College courses were very instrumental in my early career advancements.”

Keven eventually rose to executive vice president of sales and marketing, and was involved in setting up divisions and dealerships across the United States and abroad. He also helped the company secure its first patents, of which he is a listed inventor. Today, Keven provides product design input and business development support to the Fenton Mobility Co., where he also is a listed inventor.

As the Crawford brothers ease down the road toward retirement, they are appreciative of all they learned and gained from the bumps in the road of their life journeys and especially for the flat tire and detour that led them to Franklin College.

“Going to the same college as my brother and being close enough to Winamac that our parents and close friends could join in is something I’ll always be grateful for,” Brad said.

Keven added, “Absolutely! Franklin College provided us with a solid education that included the perfect combination of academics, athletics and social opportunities. The faculty, and particularly coaches Faught, Chiarotti and Lawson, all played key roles in helping us move our lives in the right direction.”

*As a current member of the NCAA Division III, Franklin College is prohibited from awarding athletic scholarships, though student-athletes are eligible for need-based financial assistance and academic-merit awards. The Crawford brothers received athletic scholarships at a time when the College was in the National Association of Intercollegiate Athletics.

Republished from the Franklin College Magazine