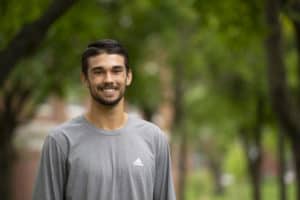 Gunnar Dittrich ’20 did not realize birds were his calling until he came to Franklin College.

Today, he specializes in using trained birds of prey to help clients address unwanted wildlife that can disrupt airplane flights, spread disease from landfills and create environmental havoc at industrial sites and other places. It is a unique line of work that he never knew existed until he began job searching. His main goals were to secure a biology-related position and relocate from his hometown of South Bend, Indiana, to Florida. He managed to do both concurrently.

“If it weren’t for all the bird experience that Dr. O’Neal allowed me to have I definitely wouldn’t have been able to land this position,” Dittrich said.

As a student, Dittrich collaborated with Biology Department Chair and professor of biology Ben O’Neal, Ph.D., on bird research projects funded by various grants. He also was a member of the College’s Earth Club, and had internships with the Muscatatuck National Wildlife Refuge in southern Indiana and the Macaw Recovery Network in Costa Rica. At the latter, he was involved in helping recover endangered neotropical parrot populations. All the hands-on experiences were solid training for his current job with Predator Bird Services.

“My favorite thing about this job, honestly, is just being out in the field every day and getting to work with the birds,” Dittrich said. Although his job is to train the birds, Dittrich said he is the one always learning something new. He continuously works on ways to better understand animal behavior and become a stronger communicator and teacher. His focus is on helping the birds he trains be efficient in their abatement roles.

“There’s always room for improvement, no matter what aspect we’re talking about with the job,” he said.

He added that working with birds is more than a job, it is an adventure. His favorite type of bird to work with is the Harris’s hawk, also known as a “wolf hawk” because it will hunt cooperatively in packs, unlike other raptors. With the average body length of 18 to 24 inches and a wingspan of 3 to 4 feet, these hawks could intimidate an unsuspecting human in their domain, but their daunting appearance is deceiving, according to Dittrich.

“They’re so fun to work with, and they’ve got such goofy personalities,” he said.

While Dittrich never imagined that majoring in ecology and conservation would lead to his current niche, his career is taking flight.

“Franklin definitely helped me expand my horizons and chase after what I wanted in life,” Dittrich said. “I’m happy doing what I’m doing.”