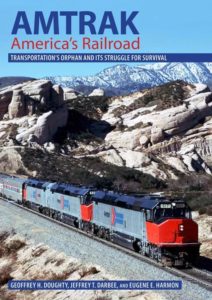 The daily trains that rattle along the tracks west of campus are as familiar a sight today as they were to Franklin College students 50 years ago. Back when Geoff Doughty ’72 began watching trains pass by the College, he had no idea American railroads would become the center of his career and give steam to a prolific writing sideline.

Doughty recalls that some students groaned about disruptions from the trains, but he was intrigued. He spent the occasional break between classes watching the trains go by, but keeping up with the rigorous course work in his majors, history and English, and working at the college radio station occupied most of his time.

“I received an excellent education at Franklin and had outstanding college teachers who prepared me for what was to come my way,” Doughty said.

After earning his Franklin College degree, Doughty taught in private schools for two years, but the expec­tations placed upon teachers to also coach sports made him reconsider careers. The railroad was calling.

He had worked summer stints in college with the Chicago & North Western Railway so after teaching he found a full-time position with Maine Central Railroad, where he worked in the transportation, revenue account­ing and engineering departments. Because of his familiarity with and knowledge of the railroad’s operations, and his ability to write, he earned a promotion to safety director. In the role, he developed the company’s drug and alcohol testing program, the first in the Northeast, and helped organize public/ railroad-crossing safety programs in Maine, New Hampshire and Vermont. Safety consulting was his specialty for 20 years.

After his career was on the right track, Doughty revived a college dream. “I wished someone would write about passenger trains,” he said.

To date, he has researched, written and published 30 books and numerous articles about railroads, passenger trains, and the history of transpor­tation. The College’s B.F. Hamilton Library offers the entire collection, gifted by Doughty over the years. His books are also available online.

His most recent book, Amtrak, America’s Railroad: Transportation’s Orphan and Its Struggle for Survival, is in its second printing with Indiana University Press. “The book details the history behind the creation of ‘America’s Railroad,’ and how the failure of a national transportation policy and partisan politics have impaired its legitimacy as a necessary component of the nation’s passenger transportation network,” according to Doughty.

Doughty is now retired from the transportation industry, but continues serving as the voice of Portland Symphony Orchestra’s broadcasts on Maine’s Public Radio network; this is his 46th season. The years he spent as student manager of Franklin College’s WFCI radio station were valuable preparation, he said.

He and spouse Pamela live in Lyman, Maine, and are looking forward to visiting Franklin College this fall for Homecoming and Alumni Weekend. Doughty is especially eager to see old friends and, of course, maybe the occasional train.