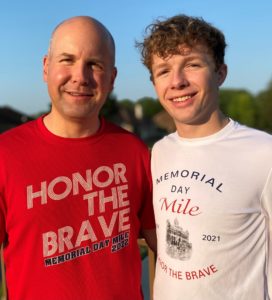 Caption: Chad McCullough ’96 and son Wyatt ’24 are avid runners. Like his father was, Wyatt is a member of the Franklin College men’s cross-country team.

Chad McCullough ’96 has spent most of his life on the run. He took up running cross-country in middle school, and he continued the sport through high school and college. He remains an avid runner today for health benefits, but the sport has taken on deeper meaning since he co-founded a community event in 2015.

The Memorial Day Mile is a 1-mile run/walk held in downtown Franklin, Indiana, centered around the Johnson County Courthouse. McCullough helped conceive the event as a way to connect and engage grateful citizens in Memorial Day observance and commemorate those who have perished during military service. The run/walk event coincides with a longstanding Memorial Day service conducted annually on the courthouse lawn.

McCullough said, “Personally, to me, it’s a holiday that’s important because it really gives us time to stop and remember the fallen soldiers who have given us our freedom.”

The 2022 Memorial Day Mile drew more than 1,000 participants. Each received a medal for finishing and a T-shirt with artwork showing the names of 165 soldiers from Johnson County who lost their lives during service in World Wars I and II, Korea, Vietnam, Iraq and Afghanistan.

McCullough said, “One of my favorite parts of the race is that it brings together three and even four generations of families in a single event they all do together. Our youngest participant each year is usually under 1, and we’ve had several over age 90 participate with their children, grandchildren and great-grandchildren.”

Memorial Day Mile, Inc. is a tax-exempt 501c(3) charity. Entry fees for the race do not cover the cost of putting on the event so individuals in the community cover the shortfall in funding each year through donations. “The support from the City of Franklin and the community has been fantastic,” McCullough said.

To learn more or get involved, visit MemorialDayMile.org.