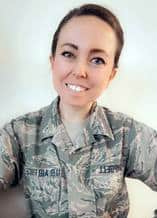 Carley Campbell ’16 is in the habit of aiming high in all she does, regardless of breaking with convention. From creating an individualized college major to joining the historically male-dominated U.S. Air Force, Campbell has taken risks to reach her goals.

Campbell came to college with a passion for government and foreign affairs, but the traditional academic majors weren’t an exact fit for the future she imagined.

“The idea of graduating and moving into a typical 9 to 5 desk job was my personal nightmare and, quite frankly, still is. I wanted a career that would challenge me,” Campbell said.

Guided by her interests and aspirations, Campbell collaborated with associate professors of political science Allison Fetter-Harrott, Ph.D., J.D., and Randall Smith, Ph.D., to develop an individualized major in global security and international relations.

“They really went above and beyond to help me find internships and build the major I wanted; they made a lasting impact on me,” Campbell said. “My Franklin College Model U.N. experience also played a huge factor in my career decision-making.”

The Air Force, with its mission “to fly, fight and win in air, space and cyberspace” has presented Campbell with the career challenges she hoped, and then some. Like all recruits, Campbell went through eight weeks of Basic Military Training to build up physical and mental skills.

“I will admit, it blindsided me to look around the room and see that I was maybe one of two women in a room full of airmen, but that feeling subsided over time. In my experience, everyone looked out for each other and worked as a team.”

According to a May 2020 Brookings Institution report, across the four major U.S. Department of Defense services, women represent only one of every six Americans in uniform, and about 19% of the Air Force. In 2020, the Air Force appointed a woman for the first time to the senior enlisted role of Chief Master Sergeant, with JoAnne S. Bass making history.

Campbell also made military news last year. She was specially selected for Airman Leadership School and earned the coveted John Levitow Award. Recipients must rank in the top 1% of their class and excel in communication and collaboration throughout the 24-day program.

“It’s an honor to be making these steps for those before us, and all of those who will follow us in the future,” Campbell said.

“I was quite nervous having to learn it in about 18 months. The grammar for Russian is particularly intense, and becoming fluent that quickly was an experience,” she said.

Next on Campbell’s horizon is a transition to the Air Force Reserves, which will allow her to stay in the military and join the workforce; a return to active duty also remains on the table. For now, she lives on the Fort Meade military base in Maryland with her spouse, Colby Martin. They met at the DLIFLC. She also is launching an online graphic design business and drafting a novel.

By Alexa Shrake ’23, Franklin College Pulliam Fellow in the Office of Communications

“Suiting Up” with Rafael...