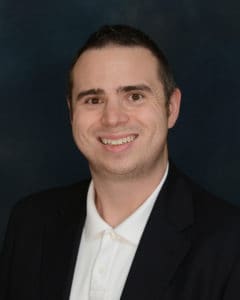 The Indiana Section of the Mathematical Association of America (MAA) awarded Justin Gash, Ph.D., professor of mathematics at Franklin College, with the 2021 Distinguished Service Award. Gash received the award virtually during the organization’s meeting on Saturday, March 27.

The Indiana Section Distinguished Service Award was initiated in 1993 to honor a member of the Indiana Section by acknowledging his or her extraordinary contributions to the group and outstanding efforts consistent with the stated purposes of the Mathematical Association of America and the Section, namely, assisting in promoting the interests of, and improving education in, the mathematical sciences in America, especially at the collegiate level.

From 2010-2016, Gash served in the elected position of Student Activities Coordinator, a position on the executive board of the Indiana MAA Section. In this leadership position, he managed the Indiana Collegiate Mathematics Competition each spring and organized student workshops at the spring meetings.

In addition, Gash has served as the Section Coordinator for Indiana NExT. This program is in association with Project NExT, a national program that provides teaching-specific professional development to newly minted doctoral recipients. Through Indiana NExT, Gash supports his colleagues who work in Indiana and helps organize panel discussions for the fall and spring meetings.

Gash received a bachelor’s degree in mathematics and computer science from DePauw University. He received a master’s degree in computer science and a doctorate of philosophy in mathematics from Indiana University. He began working at Franklin College in 2008. Gash’s expertise is in computational algebra and cryptology. In May, 2016, Gash was awarded the Dietz Award for Faculty Excellence. It is the highest faculty award given at Franklin College. It recognizes outstanding teaching, scholarship and service. Gash was also recognized the same year as a Legend of Castle High School, an award for outstanding achievement from his alma mater. Gash represented his Franklin College colleagues as the Faculty Steering Committee Chairman from 2019-2020.

“Considering Dr. Gash’s exemplary service record at Franklin College, it is not surprising that he so willingly extends that same service to his discipline, specifically through his work with the Indiana Section of the MAA,” said Kristin Flora, Ph.D., vice president of academic affairs and dean of the college. “We are proud of Dr. Gash’s work as he continues to promote the interests of mathematical science and influence the next generation of mathematical educators.”

The Mathematical Association of America is the world’s largest community of mathematicians, students, and enthusiasts. We accelerate the understanding of our world through mathematics because mathematics drives society and shapes our lives. Learn more at maa.org.