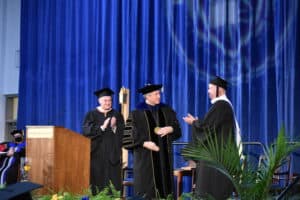 President Kerry N. Prather shared his vision today for the future of Franklin College during his inaugural address following his investiture as the 17th president in the institution’s 187-year history.

The historic ceremony formally installing him as president was held in the Spurlock Center gymnasium for an audience of friends, family, distinguished guests, community members, trustees, students, alumni, faculty and staff.

Prather’s investiture followed the greetings, and the inauguration ceremony closed with singing of the alma mater, “Hail to Franklin,” led by the Franklin College Choir; a blessing by The Rev. Adams Ingram; and the recessional performed by the White River Brass Quintet.

Prather was appointed as acting president in January 2020 and named president one month later, with his term slated to end in June 2022. In March 2021, the Franklin College Board of Trustees announced Prather would continue to lead the institution until at least July 1, 2024.