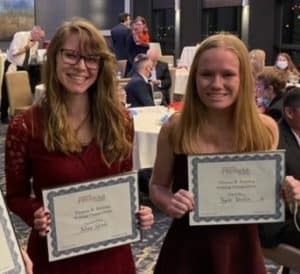 The annual writing contest, sponsored by the Indianapolis Press Club Foundation, draws the interest of numerous students from colleges and universities around the state who must submit two published articles as part of their contest applications. From there, 10 finalists are selected and invited to compete against one another to see who can write the best feature article on deadline. The winners walk away with cash prizes as well as bragging rights.

Of the 10 finalists chosen, six of them represented Franklin College, while other institutions represented included Goshen College, Ball State University and Indiana University. The students were invited to travel to Indianapolis on Friday, Nov. 12 for the two-day event to attend an informal dinner and participate in one-on-one sessions with seasoned journalists, who provided feedback on the students’ submitted work. On Saturday, the 10 finalists were given five hours to report and write an article on the topic of “Indianapolis in flux.” Students were encouraged to focus on the pandemic, racial tensions or construction in downtown Indianapolis. The students roamed the streets of downtown Indianapolis to find their inspiration and interview sources, before returning to the office of the Indianapolis Business Journal to write their stories. Following their deadline, they received a tour of the offices while judges reviewed their work. The top three students were celebrated, and all the finalists were recognized, at an awards banquet in downtown Indianapolis that evening.

Keating, a popular former Indianapolis Star columnist and Lilly Endowment Inc. executive, is the inspiration behind the contest. He died in 1985 at the age of 45. The Lilly Endowment underwrites a portion of the competition each year, which, since its inception in 1986, has awarded nearly $170,000 to college and university students in Indiana.

Tabby Fitzgerald, a junior from Indianapolis.

Isaac Gleitz, a senior from Corydon.

Haley Pritchett, a junior from Greenwood.