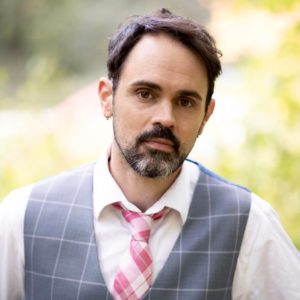 Something sinister lurks in the backwoods of southern Indiana.

Family secrets are hidden from view. Apparitions seem to hover around every dark corner. Evil permeates the landscape.

The West Baden Springs Hotel is one of the state’s most unique and treasured spaces, an architectural marvel that has been restored to its Gilded Age beauty. But there is a spooky folklore surrounding the hotel, which made it the perfect place to film a haunting and horrific movie — the recently released “So Cold the Water.”

“Once you start digging into it, there’s a whole mythology surrounding that place. So many weird things have happened there — there’s rumors, and there is documented occurrences,” said Paul Shoulberg, director of “So Cold the Water.” “There’s an aura that building gives off that has power.”

West Baden takes the eerily lit spotlight this spring with the release of the movie, based on the novel of the same name by New York Times bestseller Michael Koryta, who was raised in Bloomington. Produced by Indiana-based Pigasus Pictures, the story follows a former documentary filmmaker hired to profile an eccentric billionaire with a dark past.

“So Cold the River” is one of the most high-profile films to be shot in Indiana since the release of “Rudy.” Those behind the movie, including Franklin College professor Gordon Strain, hope that it shows what Hoosier filmmaking can be.

“We’re doing our part to get more filmmaking in the state,” he said. “It was great to partner with Cook Group (owners of French Lick Resort) and be able to use West Baden, and to have such a great story going into it. My hope is it brings more people not only to Indiana, but to West Baden to see the hotel.”

“So Cold the River” is now out in select theaters, and is available now to stream. The film is being shown at the Historic Artcraft Theatre at 7 p.m. today during a special screening.

The story behind the West Baden Springs Hotel is a perfect fit inside a supernatural thriller. The area’s famed sulphur springs led to the creation of a hotel in 1845, which drew visitors from more than 100 miles away to soak in the therapeutic waters.

After a fire destroyed the original hotel, owner Lee W. Sinclair rebuilt the facility into an ornate wonder modeled after the spas of Europe. The centerpiece of the structure was a free-span dome that stretched 200 feet.

The hotel fell into disrepair during the Great Depression, and after changing hands multiple times, was vacated in 1983. Only after preservation efforts instigated by the Cook family was the glory of the hotel restored.

That history runs through Koryta’s bestselling novel, and makes the story so enticing.

“It all starts with the hotel. This was a building put up in the middle of Indiana farmland, a building you would normally associate with somewhere in Europe or a major city,” Shoulberg said. “It doesn’t make sense that it’s there, and that’s what is so fascinating about it. The building is this symbol of what someone can do when they put their mind to it.”

With the importance of West Baden and the town of French Lick to the story, it was imperative to executive producers, including Koryta, to shoot on location at the hotel and surrounding town. They collaborated with Cook Group, the parent company of French Lick Resort, and Pigasus Pictures to make arrangements to use the hotel as the primary setting.

The result is a film oozing with authenticity — particularly in regards to the supernatural.

Actors, filmmakers and others essentially moved into the hotel for months at a time. As the only ones occupying the massive space, it could get strange sometimes.

“It’s designed as a getaway, it’s meant to be an escape. It is not designed to be your home,” Shoulberg said. “We did a lot of overnight shoots, and it did get weird. Shooting a movie puts you in that weird space anyways, but when you’re in a building like that, there is a lot of weird stuff.”

Strain had his own unusual experiences during filming.

“It was very surreal. A lot of the time we were living in the hotel, and it was closed,” he said. “It was just the cast and crew that was there, and around the curved hallways, you could hear kids laughing, even if you knew there weren’t any kids there. It was weird, creepy stuff like that.”

The challenge for Shoulberg was not allowing the grandeur of the hotel to overwhelm the power of the story.

“It would have been easy to get into a space like that and shoot this hotel from every possible angle, and it will be all about that,” he said.

“You want to have the hotel to be a character, and it will be regardless of how you shoot it, but to find a way to ground the story and make it human, you really have to prioritize character, or they’ll get lost.”

The story focuses on Erica Shaw, played by Bethany Joy Lenz of “Dexter.” Shaw is an ex-documentary filmmaker whose career was derailed by a fatal mistake. She is hired to make a documentary about a dying multimillionaire from an old town in Indiana, and travels to his home.

As she starts to uncover the secret horrors of her new surroundings, she soon realizes that the subject of her investigation isn’t who he claims to be.

“It’s designed to take you on a psychological journey. You’re not going to see monsters jumping out from the closets and saying boo,” Shoulberg said. “It’s claustrophobic, and my hope is to transport people to a headspace that is uniquely this movie.

Besides Lenz, the cast features a collection of well-recognized actors, including Tony Award-winner Deanna Dunagan, Alysia Reiner from “Orange Is the New Black,” Katie Sarife from “Annabelle Comes Home” and Andrew J. West of “The Walking Dead.”

Together, everyone has worked to make a viewing experience that grips you for the duration.

“It’s a story about characters,” Shoulberg said. “It’s huge, but emotionally, it’s always about people. The things they say will matter. Everything is in there for a reason. I think it will be a psychological ride, but if you commit to it, you’ll get a lot out of it.”

Reprinted with permission of the Daily Journal