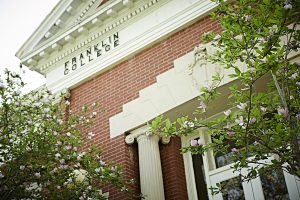 The Franklin, the student newsmagazine of Franklin College, won 26 awards at the 2021 Indiana Collegiate Press Association (ICPA) awards. Overall, the publication received second place in Best Newsmagazine, competing against magazines from much larger institutions, including the University of Notre Dame and Ball State University, which received the first and third place honors, respectively.

In addition, The Franklin received both the first-place and second-place honors for Best Editorial. “A new era for change” captured the top honor, while “During a new time, Franklin College tries” was the runner-up. Juniors Hope Shrum and Taylor Wooten serve as co-executive editors of The Franklin. Shrum is the daughter of Keith and Mary Shrum of Spencer. Wooten is the daughter of Ronald and Cindy Wooten of Clarksville.

The staff of The Franklin were honored collectively with three awards – Best Overall Design – First Place, Best Single Issue – First Place and Best Use of Social Media – Third Place for The Franklin Instagram. Comments included, “a visually elegant magazine covering a wide range of topics for its audience including localization of national issues like the CARES Act. Solid reporting. Well done.”

“These awards represent an overall commitment to the students who walk into the Pulliam School of Journalism on a daily basis,” said Ryan Gunterman, MJE, faculty adviser for The Franklin Student Media. “None of this happens without extraordinary dedication from everyone in the building and on campus. Those at The Franklin produced material that is at the same level as, and even better than, the work being done at other prestigious programs in a state with a deep history in quality journalism. That’s all possible because of the educational and real-world opportunities afforded them at Franklin College. Everyone at the college should be as proud as I am of these remarkable journalists.”

Indiana Collegiate Journalist of the Year – Runner-Up, Erica Irish. Irish, a senior, is the daughter of Eric and Charise Irish of Indianapolis (46217). She has previously served as co-executive editor of The Franklin and is one of the most decorated students in the history of the journalism program at Franklin College.

Feature Story – First Place, Emily Ketterer. A December 2020 graduate of the college, Ketterer is the daughter of Dave and Lori Ketterer of Whiteland. She won for the article titled “A New Leader,” detailing the recently appointed president of Franklin College and his devotion to the school. The Franklin also captured Third Place honors in this category with Taylor Wooten’s article, “Franklin College alumna alleges Indianapolis school fired her for being gay.”

News or Feature Column – First Place, Emily Hales. She won for the article titled “Campus closed down. Then my laptop died.” A judge commented, “This column does a good job of outlining the problem students face from the pandemic and puts a personal spin on it with the writer’s experience. She does what a good columnist should do and offers solutions, not just a litany of complaints about the problem.” Hales, a senior, is the daughter of Philip and Christina Hales of Columbus. The Franklin also captured Second Place in News or Feature Column with the article, “Suicidal thoughts in young people” by Erica Irish. It was described as “well-researched and timely.”

News Story – First Place, Isaac Gleitz and Alexa Shrake. The duo captured top honors for the article “America First Union leaders shared racist messages in private chats.” Gleitz and Shrake also captured Third Place honors in the News Story category for the article, “America First’ nationalist group flyers found on campus.” Gleitz, a junior, is the son of Karen Schwartz of Corydon and Roger Gleitz of Leavenworth and Shrake, a sophomore, is the daughter of Kristinia Love of Martinsville.

Sports Feature Story – First Place, Isaac Gleitz. “Game On” captured top honors for Gleitz for his “fantastic look at an off-the-beaten-path sport” (e-sports). On its heels for Sports Feature Story – Second Place was Taylor Wooten’s article “Ryan Bixler chooses to spend fifth year playing baseball at Franklin.” The article focused on an extension in eligibility due to the COVID-19 pandemic for spring athletes.

Illustration – First Place, Arianna Lovitt. A junior, Lovitt is the daughter of Aaron Lovitt and Allana Blume, both of Greenwood. Her cartoon panel illustrating how people are dealing with COVID in their daily lives captured the judges’ attention, as did her illustration titled “Calling for change” which received Illustration – Second Place honors.

In the category of Essay, Alexa Shrake was honored with Second Place for what the judges called “A heart-felt personal story about a family member gone astray.” The title of the piece was “Addiction demands attention.”

In the category of Best In-Depth Story, Erica Irish captured Second-Place honors with “Lost Credit,” an article that detailed how the loss of a program affected the school and its students. The judge commented “the human factor elevated this work.”

Irish also captured both Second Place and Third Place honors in the category of Opinion Column. Her pieces, “Does college matter amid pandemic?” and “What’s next as newsrooms shrink?” caught the attention of judges with their insightfulness and broad appeal.

Lastly, for Single Story or Package Design, Emily Hales earned Third Place for her pull-outs and graphs that enhanced an article on accreditation.

The Franklin is the award-winning student newsmagazine at Franklin College. Print editions are published monthly and reports on campus and community news are provided as it unfolds at thefranklinnews.com. Founded in 1904, The Franklin began covering the Franklin College community as a newspaper. In 1908, the newspaper became a daily publication. It underwent many changes through the years until it reemerged as a news magazine in the fall of 2017. The Franklin is part of the Associated Collegiate Press Hall of Fame and has been recognized by the ACP in numerous awards categories. At the local level, The Franklin’s work has been recognized by the Indiana Collegiate Press Association and the Society of Professional Journalists. The Franklin is an independent publication managed by student editors at the college’s Pulliam School of Journalism, and is advised by faculty and staff members at the journalism school.