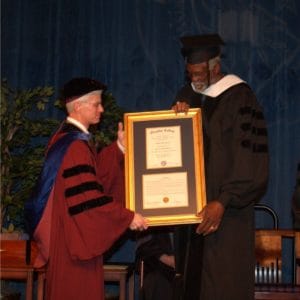 Dr. Russell’s historic professional career included leading the Boston Celtics to 11 NBA championships. Throughout his life, Russell embodied the values of Franklin College as an outspoken advocate for social justice. He co-authored Second Wind: The Memoirs of an Opinionated Man, which was followed by Russell Rules: 11 Lessons on Leadership from the Twentieth Century’s Greatest Champion.

We extend our sincere condolences to the Russell family. The world has lost a giant in both stature and influence. We are proud to celebrate him as a Franklin College alumnus.