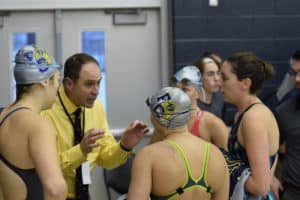 Franklin College Director of Athletics and head swimming and diving coach Andrew Hendricks has been nominated as a finalist for the National Scholastic Collegiate Trophy, awarded by the College Swimming and Diving Coaches of America (CSCAA).

Hendricks is one of three finalists from around the country up for this year’s award, which is awarded by both the CSCAA and the National Interscholastic Swimming Coaches Association (NISCA). It is the highest honor in intercollegiate swimming and diving and the recipient is the coach that has made “the greatest contribution to swimming as a competitive sport, and as a healthful, recreational activity in the province of undergraduate and scholastic education.”

Now in his 13th season at the helm, Hendricks has helped grow the Franklin College swimming and diving programs into a nationally recognized success. A total of 12 Grizzlies have been named All-Americans and another 11 have earned CSCAA Academic All-American honors.

In 13 seasons, the women’s team has accumulated a 105-20-1 dual record that includes a current winning streak of 44 straight dual wins. Franklin’s men have put together a 92-32-1 mark in head-to-head meetings, and are currently unbeaten in dual action in 2021-22.

Prior to the HCAC establishing a conference championship, Hendricks guided FC to seven Liberal Arts Conference team championships while being named Coach of the Year on five occasions.

Joining Hendricks on this year’s ballot are Nicholas Askew of Howard University and Braden Holloway from North Carolina State University. All three finalists will go before a vote of CSCAA Member Coaches and be recognized at the 61st Annual CSCAA College Swimming & Diving Awards on May 2 at Joe’s Live in Rosemont, Ill.

For more information, contact Ryan Thomas, assistant director of athletics for communications, at (317) 738-8184 or rthomas@FranklinCollege.edu.