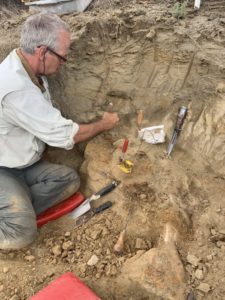 A new learning opportunity in biology was unearthed this fall to engage students in paleontology with an experienced dinosaur bone-finder.

Bio 375, the Fossil Lab with instructor Steve Bodi, takes students through the process of fossil discovery, excavation and preservation.

“We’re covering the techniques to take a fossil from the ground to a museum exhibit,” Bodi said.

Bodi is founder of the Southern Indiana Paleontology Institute (SIPI) in Martinsville, Indiana. SIPI is equal parts fossil preparation lab and educational center. Since 2015, SIPI has hosted interns from high schools and universities, and Bodi has mentored them through the process of cleaning and preparing bones for display.

He is excited to broaden the experience to Franklin College. Though he teaches the Fossil Lab on campus, at the Science Center, students took a field trip to SIPI at the semester’s start. There, students had the chance to see and hold some of his prized finds, including a four-inch long T-Rex’s baby tooth that he refers to as a “Holy Grail.”

Bodi has been a devoted paleontologist for 20 years, but fossils have been a lifelong passion. His Bachelor of Science from Indiana University is in public and environmental affairs. He is largely a self-taught paleontologist who has benefited from mentors at the Indianapolis Children’s Museum who allowed use of their lab equipment and involved him in fossil-hunting out West.

Now, he regularly goes to the High Plains to camp on ranches, usually weeks at a time, and hunt for fossils. Extreme heat, predators such as mountain lions and rattlesnakes and occasional natural disasters, such as storms, add to the thrill of the hunt. Each hunt takes thorough planning that involves getting a landowner’s permission to prospect and dig, and discussing compensation. Many ranchers decline payment because they simply are excited to be involved, Bodi said. sHe has built friendships with several ranchers over the years who now allow him to return at will.

When Franklin students visited SIPI in August, Bodi had recently returned from Montana with a flatbed trailer of 66-million-year-old triceratops fossils. Students gazed upon the trailer where field jackets, protective casings similar to the hard cast an injured person would wear, encased the fossils. They will remain wrapped until Bodi is ready to begin chipping away at the excess rock encrusting them; the fossils and rock combined weigh 4 tons.

“The bones themselves were replaced cell by cell by the surrounding rock,” Bodi explained.

Separating a single small fossil from rock takes Bodi an average of 30 hours at the workbench. Dental picks, Dremell® tools, X-acto® knives and straight pins are tools of the trade.

“We use the least invasive techniques first and foremost, always with the goal of doing no harm,” Bodi said.

His goal is to have each Franklin student complete the cleaning and preparation of one bone for study or display by end of the semester.

Alli Gootee ’22, a biology and secondary education major, was eager to start. “I’ve loved dinosaurs since I was a kid; they’re the reason I fell in love with science. Now that I’m planning on becoming a teacher this lab experience will give me more ways to connect with my students and make their learning about dinosaurs memorable.”

This Fossil Lab is possible through a charitable bequest from the Estate of John M. Spears ’47, M.D., and his spouse, Betty. John died in 2016, after retiring as a distinguished pediatrician, and Betty, a retired nurse, died in early 2021. The Spears were members of the Founder’s Society for Lifetime Giving at Franklin College.