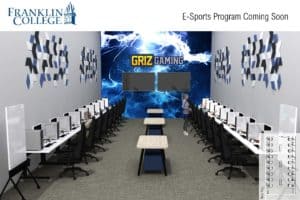 Franklin College announced plans last spring to launch an esports program to begin competing during the 2021-2022 academic year. Those plans are on track, gaining interest and even attracting donor support.

Esports is a form of sports competition involving video games. Team members compete online against other colleges and universities across the country, with championship winners becoming eligible for national competitions.

The college has joined the National Association of Collegiate Esports (NACE), one of only a small number of associations currently working to organize and facilitate college esports in an environment that is changing daily. NACE serves as the coordinator and facilitator of competitions for its members.

“Competitive gaming at the collegiate level is growing by leaps and bounds,” said Andy Hendricks, Franklin College Athletic Director. “The popularity of gaming, especially among college-age students, is at an all-time peak, so launching our program at this time makes perfect sense. It has the potential to add significant value to our campus and to our students’ overall college experience.”

“It is estimated that the gaming industry exceeded $1.2 billion in revenue in 2020,” said Hendricks. “As a result, there is a boom in the number of careers and jobs within the industry that may lead to many new endeavors on Franklin’s campus, including new academic programs and internship experiences. Moreover, we believe esports will lend to a new geographic reach for the campus by connecting students from all over the world to the benefits of the Franklin College experience.”

Franklin’s co-ed team, named “GRIZGaming” is currently in the recruitment stage. According to Hendricks, the college wants to establish team membership first and will then turn its focus to selecting the coaching staff.

The college has selected six games for individual team members to choose from when it comes to training and competing, including League of Legends, Fortnite, Rocket League, Call of Duty, Overwatch and CS:GO. Most esports athletes train and compete in one or possibly two games, much as do athletes in other collegiate sports.

Later this spring or early summer, the college will begin converting space inside Spurlock Center into a custom-built, state-of-the-art gaming center to be used by the team. It will include as many as 18 modern gaming rigs right out of the gate along with special lighting and multi-function space for developing gaming strategy.

Many Franklin College alumni and friends of the college have expressed excitement about the new program and some have provided support by donating funds toward construction of the new center and the purchase of gaming equipment.

“We are very grateful to trustee Katie Kruse for her generous foundational investment in the program, and to trustee Cathy Dunn and her father, alumnus Ken Dunn, for their support as well,” said Franklin College President Kerry Prather. “These gifts and the support of future donors to the program are critical for this exciting component to our digital fluency initiative.”

As little as five years ago, few colleges and universities had esports teams. Today, that number is growing by the day with more than 425 programs nationwide.