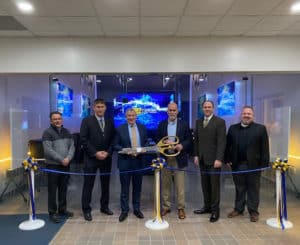 Franklin College formally unveiled its new esports arena on Wednesday (Dec. 8) afternoon, with a ribbon-cutting ceremony inside the Spurlock Center to officially usher in the era of GRIZ Gaming.

Franklin’s esports program was announced back in March 2021 and the Griz gamers spent the fall season competing against other colleges in various games, taking part in a full Rocket League season. However, with the arena under construction during the fall, the Grizzlies were forced to migrate elsewhere on campus to compete. This spring, the Griz Gamers will be able to play full seasons of multiple games in their own location.

“The world of esports and competitive gaming is expanding very quickly,” Director of Athletics Andrew Hendricks said. “Franklin College is proud to have entered this market early, and we are already seeing results. The program is appealing to new prospective students, and our teams are being exposed to a wide breadth of opportunities that parallel the gaming industry. This new arena gives our teams a competitive advantage over many programs by providing a dedicated space to compete, strategize, and collaborate while also building positive relationships with one another. We are grateful to those who helped dream this idea and provide the necessary funding to make it a reality.”

Franklin College esports program director and head coach Todd Burris added, “While it is exciting to see the next evolution of the student college athlete compete at Franklin College, it is also exciting for those who donated to see the end results of their generosity.”

With a new home featuring state-of-the-art technology in place, the Griz gamers will turn their attention to the spring season where they will compete in Rocket League, CS:GO, League of Legends, Super Smash Bros., Fortnite and Call of Duty.