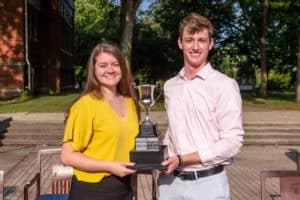 Each year, two outstanding sophomore students are recognized for their first-year academic and campus-community achievements. Recipients are chosen by the faculty.

As award winners, List and Davidson had the privilege of signaling the start of the academic year by ringing the ceremonial college bell. They received engraved plaques as keepsakes.

“Elliot and Jadyn have been recognized by the faculty for the exemplary academic and leadership record they have demonstrated in their first year,” said Kristin C. Flora, Ph.D., vice president for academic affairs and dean of the college. “The Laurels and Lancers Award is outward recognition of both what they have accomplished and the promise of continued success in their remaining time on campus. This is an esteemed honor that demonstrates to our incoming students what is possible with hard work and a willingness to seek out the many opportunities we have to offer academically, athletically, and in the co-curriculum.”

List is the daughter of James and Julie List of Newburgh. She is a music major. On campus she serves as vice president of Student Congress, president of FC Dancers and special event chairman for Zeta Tau Alpha Fraternity. She earned academic recognition on the president’s list (4.0 GPA or higher) during the fall 2020 semester and the spring 2021 semester.

Davidson is the son of Josh and Mary Davidson of Zionsville. He is a biology major. He is a member of Lambda Chi Alpha Fraternity and the Jazz Club. A student-athlete, Davidson competes for the Grizzlies as a member of both the cross country team and the track and field team. He earned academic recognition on the President’s List (4.0 GPA or higher) during the fall 2020 semester and the spring 2021 semester.