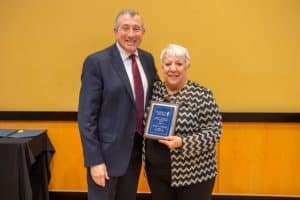 Barbara Chambers, administrative assistant for the finance division, has been selected as the 2021 recipient of the Margaret Hommell Staff Service Excellence Award.  She received the award at the 28th Annual Employee Appreciation and Holiday Celebration Luncheon in the Napolitan Student Center on Friday, Dec. 17.

Chambers began her employment with Franklin College in 1995 as a part of the Development Office (now Institutional Advancement). In 2000, Chambers transitioned to the role of secretary to the vice president of business and finance. While her title has evolved over the years, and her job responsibilities have vastly increased, Chambers has remained in that department for the past 21 years, becoming one of the ‘faces of Franklin’ that so many students and employees have come to rely on for assistance.

In a nomination letter for the award, one colleague described Chambers as “one of the most courteous, respectful, helpful employees I have had the pleasure to work with. She interacts with all employees in her role as assistant to both the vice president for finance and the director of human resources. In addition, she is patient and helpful to students who are in the campus Work Study program, overseeing the payroll program for this group as well.”

Chambers was described as an employee who has embraced and used technology to her advantage, mastering the many payroll system upgrades and on-line application processes that have been implemented over the years. She has also continuously looked for ways to streamline the business and human resource processes in her area, benefitting not only herself, but fellow employees.

Chambers was also described as the first to volunteer her assistance above and beyond her regular duties. She has helped the Office of the President with the annual commencement ceremonies as well as inauguration ceremonies. She has volunteered annually to help with the Franklin College United Way Campaign, helping the college to receive the Most Outstanding Employee Campaign in the Education Area in 2007-08 when she spearheaded the efforts. In addition, she has assisted with food drive campaigns and employee search committees.

In her free time, Chambers officiates swim meets at the high school and collegiate level, as well as USA, Masters and disability swim meets. What started out as a way to combat boredom during her son’s long USA swim meets has turned into a second vocation for Chambers. Her dedication and expertise to the sport has been recognized with many awards, including the Outstanding Indiana High School Athletic Association (IHSAA) and The National Federation of Officials Associations Swimming Officials Award in both the 2009-10 and the 2013-14 seasons. She has also had the honor of serving as a judge for the U.S. Olympic swimming team trials. Her role has evolved into that of an evaluator of other officials, helping them improve their skills.

Chambers recently announced that she will retire in early 2022 from Franklin College after 26 years of service, leaving her more time to spend with her children and grandchildren, as well as to officiate swimming.

Chambers was visibly touched when announced as the recipient of the award. “I am honored to be awarded the Margaret Hommell award,” said Chambers. “We were very good friends, and I miss her and think of her often.”

Chambers and her husband Greg live in Martinsville.

Full-time employees celebrating a milestone anniversary with the college were also honored at the luncheon for their years of service. They include the following:

And, receiving a standing ovation at the luncheon for her many years of service: 50-year award: Cheryl Stewart (Franklin). Stewart also has the distinction of being the first recipient of the Margaret Hommell Staff Service Excellence Award in 1999.