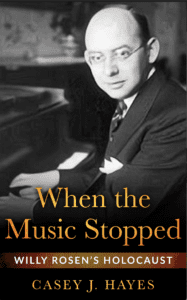 Casey J. Hayes, Ph.D., Franklin College professor of music, the A. J. Thurston Chair of Music, music department chair and director of choral activities, will host a book release party for his newly released book, When the Music Stopped…Willy Rosen’s Holocaust. The event will take place at 6:30 p.m. on Tuesday, March 15 in Richardson Chapel. Guests will be required to comply with institutional COVID restrictions in effect at that time.

The event will include refreshments from 6:30-7 p.m. A short reading of When the Music Stopped…Willy Rosen’s Holocaust will begin at 7 p.m., followed by a Q&A session and a book signing. Copies of the book will be available for purchase at the event for $19.99. Copies may also be purchased in the Franklin College bookstore and on Amazon.

Published by Amsterdam Publishers, The Netherlands, the novel is about Willy Rosen and his success as a renowned songwriter, composer, and cabaret player. Willy Rosen’s life was interrupted when his Jewish status leads him to flee Germany to the Netherlands as a result of growing Nazi powers.

His escape to relative safety is short-lived when he is captured and deported to the Westerbork transit camp. Willy Rosen tries to avoid – or at least delay – death in a concentration camp for him and his theater group by performing for commandant Gemmeker and their fellow prisoners. Such a fragile existence demanded that every show be better than the one before; an ultimate test of skill and talent. Every dance, every song and every performance reminded them that their lives were at stake, that they could easily be eradicated if they didn’t put a smile on their oppressor’s face. Rosen’s cabaret group survived with this incessant fear for two years. They were among the last to be sent on transport east.

When the Music Stopped…Willy Rosen’s Holocaust is a fictionalized historical account that follows the inspiring life of Willy Rosen from his time as a celebrated German soldier in WWI, a famous entertainer, and finally, a victim of Auschwitz’s gas chambers. It is a heart-warming yet tragic story that reminds us that beauty can exist amidst horror.

Hayes earned his Ph.D. in music education from the Steinhardt School of Education, New York University. His interest in Weimar Germany and its brief yet beautiful emergence of culture led him to discover the music of Willy Rosen and his fascinating but largely unknown life. In 2021, Hayes was selected as an Austrian Fulbright scholar and was named the Fulbright-Botstiber Visiting Professor of Austrian-American Studies at the University for Music and Performing Arts, Vienna. His research topic, Rosa Wien; Gay Rights, Schlager and Self-Exile: 1918-1939, focused upon the flight of Vienna’s LGBTQI+ and Jewish cabaret communities during the Anschluss, and their recreation of Viennese cabaret in the United States.

Those interested in attending the event are asked to register here.