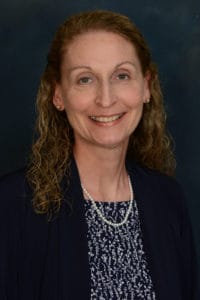 Franklin College Professor of Biology Alice Heikens, Ph.D., was awarded the Distinguished Service Award from the Indiana Academy of Science during its 137th Annual Academy Meeting in Indianapolis on March 26, 2022.

The Academy Council may select and honor one academy member with this award each year for his or her outstanding scholarship. The award is bestowed upon an individual who has been recognized as having supported the academy through service exceeding any normal expectation.

“It is such an honor to be recognized by the Indiana Academy of Science,” Heikens said. “This was the first organization I joined when I came to Franklin College in 1991. My students and I have learned much by presenting research at these meetings over the past three decades, and I have enjoyed serving IAS in various capacities. When I served as president in 2018, I was only the 11th woman to serve in this role. It is an honor to model leadership for our students and encourage them to be leaders.”

Heikens earned her bachelor’s and master’s degree from the University of Central Arkansas and her doctorate from Southern Illinois University. She is a plant ecologist who specializes in endangered species and plant communities. Her research focuses on individual endangered species, rare plant communities and natural areas management with an emphasis on invasive species. She works with multiple state and federal government agencies as well as non-profit conservation organizations. She and her students often present their research at regional and national conferences.

“We are proud of Dr. Heikens and in particular, this recognition of her years of service to the IAS,” said Kristin Flora, Ph.D., vice president for academic affairs and dean of the college. “Over the course of her career at Franklin College, she has demonstrated the same service-oriented commitment to our campus community, including mentorship of student research, maintenance of our field biology stations, and leadership of our liberal arts core curriculum.”