Franklin College will host its 2021 commencement ceremony at 10 a.m., Saturday, May 22 in Stewart “Red” Faught Stadium on campus. The outdoor facility allows for appropriate physical distancing of participants as well as guests, which will be limited to six per graduate. Tickets are required to attend the ceremony, and face masks will be required.

Should severe weather necessitate, the ceremony will be moved indoors to Spurlock Gymnasium. Since the facility does not allow for appropriate physical distancing protocols, no guests would be invited. Regardless of the venue, the event will be live-streamed on the college website at FranklinCollege.edu/commencement.

The commencement speaker will be Billie Dragoo, founder and CEO of RepuCare, a proven work force solutions provider to Fortune 500 clients and managed health care providers. Dragoo will receive an honorary doctor of humane letters from the college.

Baccalaureate will be held at 4:30 p.m., Friday, May 21 in Spurlock Center Gymnasium. Leah Gunning Francis, Ph.D., vice president for academic affairs and dean of the faculty at Christian Theological Seminary in Indianapolis, will give the address and receive an honorary doctor of divinity from the college. Attendance at the event is by invitation only, and all COVID safety protocols will be followed. The event will be live-streamed at FranklinCollege.edu/baccalaureate.

Named by Fortune Magazine as one of the top 10 women entrepreneurs in the United States, Billie Dragoo was one of 720 entrepreneurs, throughout the world, who was invited by the President of the United States to attend the 2016 Global Entrepreneurship Summit at Stanford in California. For four years she served as a National Judge for the Ernst & Young Entrepreneur of the Year Awards and was a recipient of the award in 2008. Long recognized for her entrepreneurial impact in the State of Indiana, Dragoo was named 2014 Central Indiana Business Hall of Fame Laureate, which honors outstanding men and women who epitomize success in the business world. She was also honored with the 2011 Girls, Inc. Touchstone Award. She is a recipient of IBJ’s 2009 Women of Influence Award in recognition of business and community excellence and leadership. In 2008, she was awarded the Torchbearer Award for Entrepreneurial Advocacy, one of the highest awards presented by the governor for recognition of outstanding women. In 2007, she was awarded the annual Starkey Entrepreneurial Women’s Award.

She is the co-founder of the Indiana Conference for Women, now is its 10th year. ICFW is the largest one-day professional development conference for women in the Midwest.

Dragoo remains highly engaged in a wide variety of community, civic, and professional organizations and is nationally recognized for her efforts in mentoring, leadership, and philanthropy. 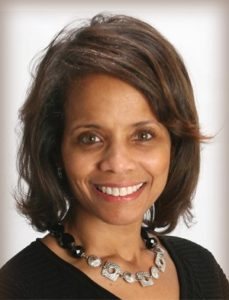 Dr. Leah Gunning Francis is the Vice President for Academic Affairs and Dean of the Faculty at Christian Theological Seminary in Indianapolis, Indiana. Gunning Francis is also the author of the book Ferguson and Faith: Sparking Leadership and Awakening Community (Chalice Press, 2015). She interviewed more than two dozen clergy and young activists who were actively involved in the movement for racial justice in Ferguson and beyond.  Gunning Francis researched and wrote Ferguson and Faith while serving as the Associate Dean for Contextual Education and Assistant Professor of Christian Education at Eden Theological Seminary in St. Louis, Missouri.

Gunning Francis’ second book, Faith After Ferguson: Building Resilience and Cultivating Wisdom is scheduled to be released later this year.  Gunning Francis followed up with clergy and young activists from St. Louis to find out what has happened since then and includes reflections on some of the current movements for racial justice nationwide.

In 2012, Gunning Francis was awarded the prestigious Engaged Scholars Fellowship to study issues of risk among middle-class African American young men.  She argues that the metanarrative about young black men puts all of them “at risk,” regardless of socioeconomic class, and utilizes the narrated experiences of black mothers to construct a new narrative about young black men that honors their humanity and is concerned for their well-being.  Gunning Francis was featured in the 2017 PBS documentary The Talk: Race in America.

Dr. Gunning Francis’ additional research interests focus on transformative education as reflected in her doctoral dissertation, “Beyond “Band-Aids” and Bootstraps: Toward a Womanist Vision of Christian Education as Social Transformation.”  Her writing reflects her commitment to the spiritual, emotional and physical well-being of women, men and children, and highlights her particular interest in underserved and minority communities.

Gunning Francis has provided pastoral leadership for congregations in Georgia, Illinois and Ohio.  She has received numerous awards which include the Candler School of Theology’s G. Ray Jordan award for excellence in integrating academic study with constructive leadership and service, and the Fund for Theological Education’s Doctoral Fellow Award. In 2015, she was awarded an Honorary Doctorate of Humane Letters by Fontbonne University.

Gunning Francis earned a Bachelor of Science degree in Marketing from Hampton University; a Master of Divinity degree from the Candler School of Theology at Emory University; and a Doctor of Philosophy degree from Garrett-Evangelical Theological Seminary in Evanston, Illinois.

A native of Willingboro, New Jersey, Gunning Francis is married to Rev. Rodney Francis. They live in Indianapolis with their two teenage sons.