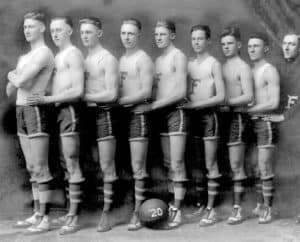 The historical significance of the team’s impact on local and state history and the milestone anniversary of their first basketball championship were the impetus for a collaborative research project that involved individuals at Franklin College, Johnson County Museum of History, Johnson County Historical Society and Franklin Community School Corp.

The culmination of their efforts that began last spring is an Indiana state historical marker commemorating the Franklin Wonder Five. Historical markers help communities throughout the state promote, preserve and present their history for the education and enjoyment of residents and tourists of all ages. Since 1946, the Indiana Historical Bureau has installed more than 650 of these markers across Indiana; the Franklin Wonder Five marker will be the fourth in Johnson County.

“We are very proud of what the 10 students in Franklin College’s Public History course have accomplished with valuable guidance from their history professor Dr. Meredith Clark-Wiltz and co-instructor David Pfeiffer, the Johnson County Museum of History director,” said Lori K. Schroeder, Ph.D., provost and dean of the college.

“The entire process, from the research advocating a historical marker to the planning of a dedication event, has been a valuable engaged-learning opportunity for our students. On top of building their professional skillsets, they are using what they learned in the classroom to make a difference in the community. These practices characterize our distinctive approach to the liberal arts and are hallmarks of the Pursuit at Franklin College curriculum.”

The historical marker will be unveiled and dedicated on Thursday, March 12, 2020, at   4 p.m. during an outdoor ceremony on the east side of the Franklin College Fitness Center. The center is the former college gymnasium where the Franklin Wonder Five played. An indoor reception will immediately follow the dedication. The ceremony also will be moved indoors, in the case of inclement weather.

Coinciding with the events at the college, the Johnson County Museum of History will open a Franklin Wonder Five exhibit featuring artifacts and memorabilia from the museum’s collection and items on loan from community partners. The exhibit will open at 1 p.m. on Thursday, March 12, and remain open through early October 2020. The museum’s regular hours of operation are Tuesday – Friday, 9 a.m. to 4 p.m., and Saturday, 10 a.m. to 3 p.m. Call ahead or check online to avoid holiday closures.

“We are delighted that Franklin College has a role in helping the Franklin Wonder Five make history, again,” said Kerry Prather, acting president of the college. “Given the impact that head coach Ernest ‘Griz’ Wagner had on his players and the collective impact they had on the community it seems only fitting for their story to be told in perpetuity, in Franklin. We are honored that Franklin College, home of the coach’s namesake Grizzlies athletic teams, will be the historical marker’s permanent home.”

All events are free and open to the public. However, registration is requested to assist with seating and menu planning.