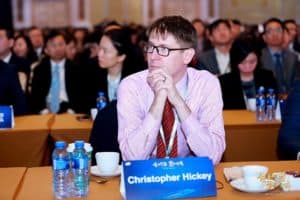 Since 2008, Chris Hickey ’92 has lived in China and held professional roles involving him deeply in the complexities of engaging with government officials, manufacturers, scientists and other stakeholders abroad and in the United States, to help shape and implement policies pertaining to food, drug and medical-device safety.

He is currently serving his fifth year as senior director for global policy/emerging markets, Asia Pacific, at Pfizer pharmaceutical company. He previously worked for the U.S. Department of Health and Human Services as office director of Asia and the Pacific. During a U.S. business trip in January 2020, Hickey graciously made time to visit with Franklin College students enrolled in an Immersive Term course called Demystifying China. Hickey gave an overview of what he, his spouse, Paige, and their daughter, Stella, have experienced as Westerners living abroad, and he talked in depth about the modernization of China and the challenges of helping shape health-care policy and reform. The Franklin College Magazine followed up with Hickey for an interview about the impact of COVID-19 on his life and work in China. The April 2 email exchange follows.

Where do you live and work in contrast to where COVID-19 originated?

“I live in Beijing. The coronavirus originated in Wuhan, Hubei Province, which is about 750 miles south. China is about the same size as the continental United States, if you overlay those two maps. Beijing falls in about the same spot as Philadelphia, and Wuhan falls roughly where Atlanta is.”

What goods and services have become more difficult to access in your area during the pandemic?

“At the height of the outbreak, virtually all businesses other than grocery stores and pharmacies were closed. While a few food items, like oil and rice, which are central to Chinese cooking, ran short, most things stayed in stock. It became very difficult, however, to find face masks, which are required for moving around in public here in China.”

Several U.S. businesses have announced permanent closures or massive layoffs. Has that also been the case in China? Are restaurants, schools and other public venues remaining open or suspending operations?

“The first wave of COVID-19 infections here peaked in the first or second week of February, about eight to 10 weeks before infections are projected to peak in the United States. Schools here began to close around mid-January in anticipation of the Lunar New Year. That annual school closure lasts for about five weeks, even in a normal year. So, schools were closed in advance of the outbreak and remain so now. All non-essential businesses were closed. The slow reopening of those businesses began in late February and continues even now.”

News reports frequently indicate an inadequate supply of masks, ventilators and gloves at U.S. hospitals. Are conditions similar in China?

“At the height of the outbreak in China, hospitals here faced the same shortages the United States is facing now.”

Through your role with Pfizer, can you help make an impact in terms of access to supplies or better preparation for the future?

“Early on, the Pfizer Foundation provided financial assistance to support the delivery of urgently needed aid and supplies to frontline health-care workers in China. This included grants to Direct Relief and Project HOPE, who worked with local partners on the ground in Wuhan and other affected areas. This funding helped to address immediate needs for delivery of supplies and to support longer term health-care goals. “When the worst of the outbreak was over, a Chinese think tank that advises top government leadership in Beijing on China’s public policy approached Pfizer and other private-sector players for our input on how to improve China’s preparedness for future pandemics. This gave us the opportunity to make recommendations that we think will benefit China and the world in the future.”

How does a health crisis like the pandemic impact how you approach your work on behalf of Pfizer?

“It certainly puts a point on things. At Pfizer, our focus is on breakthroughs that change patients’ lives. There’s no mission more urgent than the present one of finding vaccines to prevent and antivirals to treat COVID-19. When you work on the government affairs side of things, that means shaping the environment so that researchers have their best possible chance to create these vital interventions, and on the other end, patients have access to these life-saving products.”

What skills from your liberal arts background are most valuable at this time?

“My liberal arts background serves me every day, in work and in life. During times of special duress and stress to the global system, what’s needed more than ever are leaders who connect the dots, who think in non-traditional ways across disciplines, and who can communicate in a way that connects with people across cultural lines. Those are all skills that I learned and honed at Franklin.”

During your visit to Franklin College, you mentioned that in spite of the many challenges in modern China there is a consistent, underlying spirit of pride and optimism. How has the pandemic affected that, based on your experiences at work and in your community?

‘There’s a Chinese point of pride in being able to ‘eat bitterness’ and persevere through difficult times. The public outcry here to the missteps of the government in the early response to the outbreak has been well documented in the international media. But I think there’s also been a second parallel theme, as the control measures have had their effect, Chinese people have taken enormous pride in their resilience and in sacrifices individuals made for the common good, and the positive impact that those sacrifices made.”

What are some of the valuable takeaways the general public, in the United States and abroad, can gain from this pandemic experience?

“On the specific policy point, I think there are clear lessons that the global community will need to take about being prepared for the next pandemic. We’ll need to listen closely to the epidemiologists and public health leaders to learn what we can do better. On the broader political and humanitarian point, I think this pandemic has been a painful reminder that, in many cases, our safety as citizens of individual countries is best ensured through strategic global collaboration, not by going it alone as individual nations.”