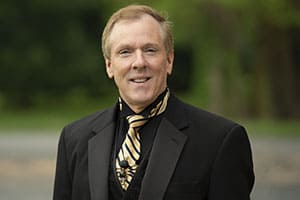 Franklin College professor Casey J. Hayes, Ph.D., has been selected as the recipient of the Fulbright-Botstiber Award in Austrian/American Studies. This notable achievement marks only the fourth time a Franklin College faculty member has been named a Fulbright scholar.

Hayes, associate professor of music, A.J. Thurston Chair of Music, music department chair and director of choral activities, is among an elite group of U.S. citizens who will teach, conduct research, and/or provide expertise abroad for the 2020-21 academic year through the Fulbright U.S. Scholar Program. The recipients are chosen based on academic and professional achievement, as well as a record of service and leadership in their respective fields of research.

“Not only has Dr. Hayes breathed life into our music program and recruited many students to the campus, but he also continues his scholarly pursuits, as evidenced by this fascinating and impressive research,” said Franklin College Acting President Kerry Prather. “He embodies the very set of qualities—teacher, enthusiast, mentor and scholar—that make so many Franklin College professors stand out among their peers.  The entire campus community celebrates with Casey in this incredible distinction.”

“Being selected as a Fulbright Scholar is among the highest academic honors that one can aspire to achieve,” said Hayes. “For me, it is the validation of my research into Weimar Germany’s wildly creative cabaret scene and the incredible individuals within its LGBT community who had to endure extreme suffering upon the rise of the National Socialists. This isn’t an area that draws a lot of scholarly research, so I feel very fortunate to have such a spotlight placed upon my work.”

Lori Schroeder, Ph.D., provost and dean of the college, said Hayes’ achievement is not only an individual triumph, but also an example of the quality of scholars that can be found at Franklin College.

“The entire campus is delighted by this news. Casey’s achievement is especially being celebrated by his faculty colleagues, most of whom have attended one or more of his compelling research presentations on the plights and ingenious productions of cabaret performers and other artists in Weimar-era Europe.  While our faculty are superb teachers, they are also talented and dedicated scholars—a truth that is surely borne out in this case by Casey’s recognition as a worthy Fulbright Scholar.”

Hayes’ research will be at the Österreichische Akademie der Wissenschaften (The Austrian Academy of Sciences) in Vienna where he will be based during his four months in the program. His research topic is “Rosa Wien” (Pink Vienna) and focuses on the historic role that Vienna played for Weimar Germany’s displaced LGBT community, as seen through the eyes of cabaret artist Paul O’Montis during the rise of the National Socialists. In addition to his research, Hayes will teach a course on early LGBT Civil Rights in America and Austria.

Hayes also has been invited as a guest researcher by the Austrian National Library, enabling him to have complete access to the library’s materials during his stay.

“As my research focus examines Vienna through the eyes of cabaret performer Paul O’Montis, the National Library’s collection of music by O’Montis is invaluable material that a regular academic would not have access to,” said Hayes. “I am very fortunate.”

Hayes began teaching at Franklin College in 2009. He received his bachelor’s and master’s degrees in music education and choral conducting from Butler University, and his doctorate in music education from the Steinhardt School of Education, New York University. He is a member of the Franklin College Gold Quill Circle of Omicron Delta Kappa, a national leadership honor society and the Indiana Delta Chapter of Phi Delta Theta Fraternity. He is the artistic director of Quarryland Men’s Chorus of Bloomington, Indiana, and a former music director of the New York City Gay Men’s Chorus and chair of the creative arts department of The Hewitt School, a private school for girls in Manhattan. Hayes is a resident of Franklin, where he resides with his spouse, Joseph R. Morris, and their two dogs, Reggie and Franklin.

The Fulbright Program is the U.S. government’s flagship international educational exchange program. It is designed to increase mutual understanding between the people of the United States and the people of other countries. The Fulbright Program provides participants – chosen for their academic merit and leadership potential – with the opportunity to study, teach and conduct research, exchange ideas and contribute to finding solutions to shared international concerns. The program is funded through an annual appropriation made by Congress to the U.S. Department of State. Participating governments and host institutions, corporations and foundations around the world also provide direct and indirect support to the program, which operates in more than 160 countries worldwide.

Since its establishment in 1946 under legislation introduced by the late U.S. Sen. J. William Fulbright of Arkansas, the Fulbright Program has given more than 380,000 students, scholars, teachers, artists and professionals the opportunity to study, teach and conduct research, exchange ideas, and develop solutions to international concerns. Fulbrighters address critical global challenges in all disciplines, while building relationships, knowledge, and leadership in support of the long-term interests of the United States. Fulbright alumni have achieved distinction in many fields, including 60 who have been awarded the Nobel Prize, 86 who have received the Pulitzer Prize, and 37 who have served as a head of state or government.