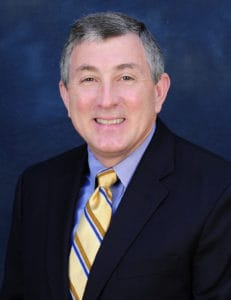 The Franklin College Board of Trustees has appointed Kerry Prather as acting president of the college, effective immediately. Prather, who has served Franklin College for 37 years, has been director of athletics and head men’s basketball coach.

Prather began his career at Franklin College in 1982 as an assistant men’s basketball coach, was promoted to head coach in 1983 and took on the additional role of athletic director in 1990. For much of that time, he also has been an executive leadership representative on the college’s President’s Cabinet. In addition to his most recent roles, he previously served as acting vice president for administration and acting vice president for enrollment management. He is a graduate of Indiana University with an undergraduate degree in English and a master’s degree in education.

During Prather’s career, Franklin College has grown athletic programming, expanded athletic opportunities for students and upgraded and built new athletic facilities. He was overseeing the college’s 21 athletic programs prior to stepping into the role of acting president. In November 2018, Prather achieved his 500th career victory with the Grizzlies’ basketball team during a season-opening win over Otterbein University. In total, he has guided the Grizzlies to five conference regular season championships, four league tournament titles and five appearances in the NCAA Division III playoffs.

“The team-first mentality that has served Kerry tremendously well in the athletic realm for more than three decades will be an asset to his role as acting president of Franklin College. Beyond his strengths in team-building, collaborating and motivating, he brings incredible passion for the college mission of preparing students for purposeful lives and significant careers.

“His stalwart service and flexibility to do what is needed, when it is needed, will help the college remain focused on doing what is best for students during this time of transition,” said James V. Due, Franklin College Board of Trustees Chair and college alumnus, class of 1982.

Prather and his spouse, Cindy, reside in Franklin. Cindy is a former chair of the college’s education department. Their two children, Katie and Robbie, are Franklin College graduates, the classes of 2013 and 2017, respectively.

Prather said, “For nearly 40 years, the Prather family has made Franklin College our home.  I have been proud to serve in a variety of roles, including at the Cabinet level in four administrations. Cindy and I represent collectively 60 years of faculty/staff service, and both our children are proud alumni.

“I assume this position with enthusiasm and confidence because I believe strongly in Franklin College and in the incredible people who do important, transformational work with our students every day.  Franklin has a bright future, and I am excited to help ensure that the institution remains focused on the heart of its mission, our current and future students.”

Prather has appointed head baseball coach and assistant athletic director Lance Marshall as interim director of athletics, and Brian Lebowitz as associate head basketball coach. Marshall has been employed at the college since 1997, and Lebowitz joined the men’s basketball coaching staff in 2014.

College Brings “The Importance of...