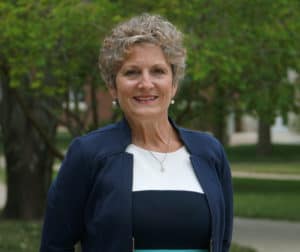 Franklin College has announced the appointment of Nora (Lowe) Brems as director of planned giving at the college. The position was previously held by Tom Armor, who retired from the college in June.

“We are delighted that Nora Brems will be serving the college as director of planned giving,” said Vice President of Development and Alumni Engagement Dana Cummings. “She brings a rich history of relationship building to this role as well as her considerable impact and success in fundraising for higher education and a dedicated history with the college.”

Brems, an alumna of the college, has worked for Franklin College during two stints over her professional career. Before graduating from the college in May of 1987, Brems was hired to represent the institution as an admissions counselor, a post she held until May 1989. She was then promoted to the role of assistant director of admissions/Ohio Valley regional representative. She continued in this role for more than a decade, eventually taking on added responsibilities as associate director of admissions in Aug. 2000.

In Sept. 2004, Brems, a resident of Ohio, left the college for a brief time to serve as the senior admissions counselor/transcript analyst at the College of Mount St. Joseph, located in Ohio. But it wasn’t long before her Grizzly ties brought her back to Indiana soil, this time to serve on the institutional development side as the director of development. Brems held this position from Sept. 2004 until her most recent promotion to director of planned giving.

“I’ve been blessed to spend the majority of my career at Franklin and this new role allows me to expand upon the deep relationships I’ve built over nearly three decades at my alma mater. The long-term success of any institution is rooted in its people, pure and simple. The people with whom I’ve built trust, and friendships, through my work in development are key to the future of the college. I look forward to serving our alumni and friends in this capacity and further delivering upon our student-focused mission. Everyone has the opportunity to leave a legacy somewhere. I am honored to have these conversations with our donors at Franklin College.”

In addition to her bachelor’s degree in journalism, Brems holds a Certificate in Fund Raising Management from the Indiana University Lilly Family School of Philanthropy.