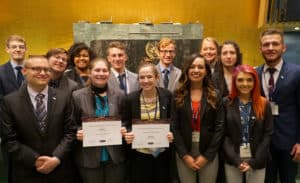 The college’s model UN team represented Kiribati, officially the Republic of Kiribati, a sovereign state along the equator in the Central Pacific Ocean. The team designed and championed a communications and technological improvement program to foster adaptation to climate change.

The team received “Distinguished Delegation” recognition, which is the second-highest award given by the conference, again ranking the FC Model UN Program as one of the top programs in the world. To earn this recognition, the team remained “in-character,” participated in committees and used the rules of procedure.

The conference also acknowledged the work of specific individuals on the college’s team.  Erica Irish ’21 and Blaine Conners ’21 were recognized with “Outstanding Position Paper” awards for their paper before the United Nations General Assembly Second Committee.

Participants at the conference also recognized their peers for indispensable work. Kyle Harmening ’20 and Kirsten Nielsen ’21 were recognized by their peers with “Outstanding Delegate” awards for their performance in the United Nations General Assembly First Committee.

The National Model United Nations Conference is the oldest and largest international conference of its kind and was the first recognized by the United Nations as a formal non-governmental organization. The college’s team competed with thousands of students from around the globe representing more than 136 countries.

“The important teamwork undergirding our success at the conference occurred prior to our departure,” said Randall Smith, Ph.D., assistant professor of political science and team adviser. “The team worked together throughout Immersive Term (month of January) to fully grasp the geo-political reality which confronts small island developing states on a daily basis. Coordinating a global policy solution across six different committees each dealing with different global issues is no small feat. In this regard, the team’s Head Delegate, Liz Wilson ’19, assisted immeasurably.  The Team also owes a debt of gratitude to Erica Irish and Blaine Conners who solidified the policy framework the team championed,” said Smith.

The team consisted of the following Franklin College students:

Avery Auton, daughter of Scott and Rhonda Auton of Franklin.

Blaine Conners, son of Tom and Marguerite Conners of Franklin.

Kyle A. Harmening, son of Charles and Tina Harmening of Bargersville.

Erica Irish, daughter of Eric and Charise Irish of Indianapolis.

Andrew McFarland, son of Roy and Kimberly McFarland of Orleans.

Desiree Nichols, daughter of Matthew and Dawn Nichols of Kendallville.

Amari Thompson, daughter of Adrian and LaShawn Thompson of Avon.