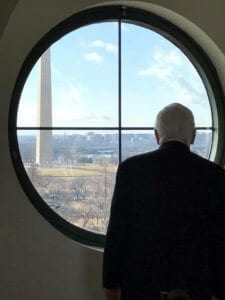 Franklin College will present the premiere of the documentary, “Richard Lugar: Reason’s Quiet Warrior,” at 7 p.m. on Monday, April 30.

The premiere will be in the Branigin Room of the Napolitan Student Center, with a post-premiere reception immediately following in the Johnson Atrium on the first floor.

The event is free and open to the public; however, RSVPs are requested in order to plan appropriately for seating.

The hour-long documentary captures the life of Sen. Richard Lugar, retired, who served as an U.S. Senator representing Indiana from 1977 to 2013. It is a production of WFYI Public Media and TheStatehouseFile.com, a news website powered by Franklin College journalism students.

The documentary will air on WFYI-TV on Monday, May 21.

“This documentary creates an invaluable opportunity for our students to have a great learning experience telling an important story about a significant figure in the history of Indiana, America and the world,” said John Krull, director of the Pulliam School of Journalism at Franklin College.

This is the third documentary Franklin College journalism students, faculty and staff have produced in collaboration with WFYI Public Media.

The second, “The Past in the Present: Historic Preservation in Indianapolis,” aired on WFYI-TV last December. It traced the ways the historic development movement has shaped Indiana’s largest city.

For additional information, contact Kailey Turner, coordinator of donor relations and stewardship, at 317.738.8041 or kturner@FranklinCollege.edu.