Lugar Documentary Nominated for Emmy Award; WFYI to Rebroadcast in Tribute to His Memory
Campus News 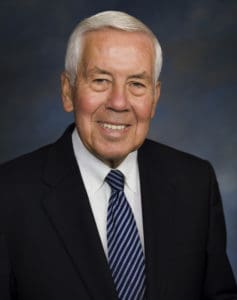 The celebratory news came nearly one year after its official premiere at Franklin College on April 30, 2018, marking the last of many times Richard Lugar visited the Franklin College campus. He died on April 28, 2019, at the age of 87.

In tribute to his memory, WFYI will begin rebroadcasting “Richard Lugar: Reason’s Quiet Warrior” on Tuesday, April 30 at 9 p.m. on Channel 20. The documentary will continue to air at various times and on other IPBS stations over the course of the next week. It may also be viewed, at any time here.

The hour-long documentary captures the life of Sen. Richard Lugar, retired, who served as a U.S. Senator representing Indiana from 1977 to 2013. It is a production of WFYI Public Media and TheStatehouseFile.com, a news website powered by Franklin College journalism students.

The documentary is one of six nominees in the category of Nostalgia Program – Program/Special/Series, selected by The National Academy of Television Arts & Sciences (NATAS) Lower Great Lakes Chapter. The winners will be announced at the Emmy Gala on Saturday, June 15, 2019, at the Renaissance Hotel in Cleveland, Ohio.

“This documentary created an invaluable opportunity for our students to have a great learning experience telling an important story about a significant figure in the history of Indiana, America and the world,” said John Krull, director of the Pulliam School of Journalism at Franklin College.