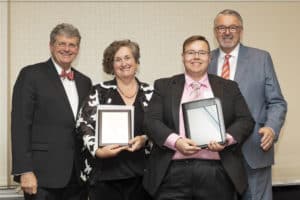 From left, David Wantz, president and CEO of ICI; Bonnie Harmon; Micajah Rippy; and Dr. Rick James, chairman and CEO of Metal Technologies Inc. and chair of the Trine University Board of Trustees. James served as the keynote speaker of the “Realizing the Dream” banquet.

Franklin College sophomore Micajah Rippy, a music major, was among a group of first-generation students from Indiana’s independent colleges and universities who were recently honored at the 29th annual “Realizing the Dream” banquet in Indianapolis.

Made possible by a grant from Lilly Endowment Inc. to the Independent Colleges of Indiana (ICI), the “Realizing the Dream” program recognizes students from ICI campuses who are the first in their families to attend college. The program also pays tribute to the students’ families and their inspirational teachers.

Rippy, son of Michael and Tammy Rippy of Pekin, was nominated for the award by Franklin College for his outstanding achievement during his freshman year and for successfully advancing toward completing his bachelor’s degree.

“As soon as I was informed that I won, I was extremely excited. I just couldn’t believe that my hard work that I was putting into my freshman year was noticed. It was truly an honor to receive this award,” said Rippy.

The Nov. 3 reception and awards dinner was held at the Sheraton Indianapolis at Keystone Crossing. Along with recognition at the event, each honored student received a plaque and a $2,500 check to assist with college costs. In addition, a $1,000 professional development grant was awarded to the teacher who inspired the recipient to go to college.

Rippy chose Bonnie Harmon, one of his teachers from Salem High School, as his inspirational mentor.

“Harmon was my band teacher from 6th through 12th grade and she was a big influence on the man I am today. She showed me the importance of music and helped me become a better musician,” said Rippy.

Following graduation, Rippy plans to teach music at the high school level. He chose Franklin College because of the friendly atmosphere and his instant connection to the faculty in the music department. He is involved in the FC Band, FC Singers and the FC Men’s Chorus. He is also a member of Kappa Delta Rho fraternity and serves as the vice president of recruitment for the Interfraternity Council.

Independent Colleges of Indiana serves as the collective voice for excellence and choice in higher education for all students. As a non-profit association, ICI represents Indiana’s 30 private, nonprofit, regionally-accredited colleges and universities. Students at ICI colleges have Indiana’s highest four-year, on-time graduation rates.