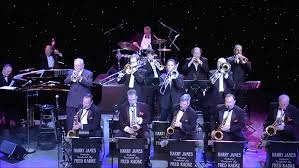 The Harry James Orchestra, directed by Fred Radke, will perform at Franklin College on Monday, April 9 from 7 to 9 p.m. in Spurlock Center Gymnasium.  Renowned New York Jazz vocalist Barbara Rosene will perform with the orchestra.

James, a musician best known as a trumpet player, formed the band in 1939.  During the golden era of the big bands, the band recorded hits such as “I’ve Heard That Song Before,” from the motion picture Youth on Parade (1942), “You Made Me Love You” (1941), “Sleepy Lagoon” (1942), “I Had the Craziest Dream” (1943), “You’ll Never Know” and his theme song, “Ciribiribin.”  The band helped launch the careers of many pop music stars of the World War II era, including Frank Sinatra.  Since James/ death in 1983, the band has continued, led by Fred Radke. Radke, also a trumpeter, toured and recorded with the orchestra over the years, as well as the Glenn Miller Orchestra.  More information about the band is available by visiting www.harryjamesband.com.

Through the support of generous donors, the concert is free and open to the public. However, RSVPs are requested in order to plan appropriately for seating, which is filling up quickly. To RSVP online, go to HTTPS://TINYURL.COM/FCHARRYJAMES.

Refreshments will be available for purchase during the event.

For more information, contact Kailey Turner at kturner@FranklinCollege.edu or 317.738.8041.