Republished with permission from the Daily Journal. 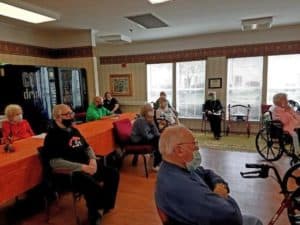 Morning Pointe residents take part in a Zoom meeting with Franklin College students. The meetings, held once a week, have developed into meaningful relationships.

When a Morning Pointe resident died earlier this year after a battle with COVID-19, a photo of a Franklin College student was found on a table in his room.

The student had taken a freshman seminar called, “Life Examined: In Pursuit of Your Best Self,” for which students visited and talked with seniors, discussing the differences and similarities between their generations, which oftentimes spans 70 to 80 years. That student came back to the college this semester with an interest in gerontology.

Franklin College Professor Jason Jimerson decided to continue the course this year, although students would not be able to visit the Franklin nursing home in person. Still, they continued that same correspondence via Zoom and in letters sent back and forth.

“My inspiration for this was, I was very close to my grandparents and my great-grandparents, but also my father and mother. They recently passed away and I learned a great deal from them,” Jimerson said.

Now, students are learning from seniors, and seniors are shedding admiration and advice on students who are just coming into adulthood. Some of those seniors are in their 90s. Gordon Dunn turned 99 earlier this year.

“The pre-World War II culture that I was born in and the culture we have today post-war are completely different in many ways,” Dunn said. “It’s difficult to understand and accept the cultures of younger people. What they believe and do is different than the way I was raised. I appreciate the younger ones, I believe in the younger ones — they’re our future. Regardless of how I feel, they’re going to be alright.”

Students are learning a lot from the seniors. Kosmo Wojack, a freshman from Hawaii, considered the importance of keeping in touch.

“Gordon taught me to always stay active,” Wojack said. “Gordon’s advice was, ‘talk to your family more. Keep contact with people from home,’ which I should do more.”

Other conversations have led to insights about what life was like growing up in the first half of the 20th century. One of the most exciting moments of growing up during that time was being among the first people in the neighborhood to own a television, said Virginia Tike, a Morning Pointe resident.

“We were one of the first houses to have TV,” Tike said. “Every weekend, everyone in class would come to our house. We would put it in the window and people outside and people in the neighborhood would watch.”

Freshman Ty Wright jokingly recalled when he didn’t have access to TV.

“I got in trouble when I was younger and I couldn’t watch TV,” Wright said. “It was the worst week of my life.”

Markiah Miller-Kees, a student in the class, learned her partner passed away in October after contracting pneumonia. Miller-Kees was never able to meet her partner in person. Still, she gained a lot from just having spoken to her, Miller-Kees said.

“It was weird finding out she passed away. I knew about her personally … we would talk about personal things that happened in our lives, but I never met her,” Miller-Kees said. “She acknowledged as stuff is happening in my life, how amazing it is that I overcome it. I’ve been through a lot not many kids have been through, but she made me feel smart and strong. She always told me to live your life because you don’t know when you’re going to be here or not.”

Last year, Jimerson had the students tell the seniors at the end of the semester what they learned from them.

The class also had seniors reflect on when they were younger. Joy Harden, 94, said she would tell her younger self to enjoy life to the fullest.

“I remember going to a seminar years ago,” Harden said. “One thing the speaker said was, ‘if you want to be successful in life, when you meet someone, make them feel important and you will be successful.’ I think I have been successful. Life is good. Life is fun. There are ups and downs. I’ve enjoyed life to the fullest. I’m happy with my life and I’m happy with what I’ve done with it.”