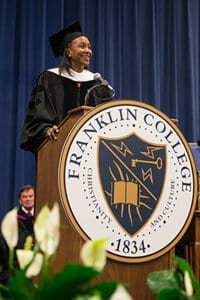 One of the greatest players in Women’s National Basketball Association (WNBA) history, Tamika Devonne Catchings, a retired forward for the Indiana Fever, delivered the 2018 commencement address at Franklin College on Saturday, May 19, 2018. The college conferred 240 undergraduate degrees and for the first-time ever conferred six graduate degrees, recognizing the inaugural cohort completing the Master of Science in Athletic Training program.

The ceremony was held in Spurlock Center Gymnasium with overflow seating in Richardson Chapel, where a live webcast of the ceremony played.  Prior to her remarks, the college awarded Catchings an honorary doctorate of humane letters in recognition of her record-setting athletic achievements in the WNBA and the Olympics and her philanthropic endeavors around the world.

Catchings’ commencement address, “#DreamsDoComeTrue,” offered a glimpse of her personal experiences overcoming obstacles such as a hearing impairment diagnosed at age 3 and numerous injuries sustained during her 16 years with the Indiana Fever. She acknowledged that preserving was not easy, but that with determination she found all things were possible.

Catchings gave the class of 2018 this advice for their own success: “First, realize that failure is not an option. Find a way to stay determined. Second, prepare for every task ahead. Third, don’t settle for mediocrity, strive for excellence.”

“Push on. Push through. Dreams do come true,” Catchings said.

The senior class speaker was Megan Helterbrand, a native of Cloverdale, Indiana, who completed an independent major in sports administration. Commencement coincided with the 26th wedding anniversary of her parents, Donnie and Melissa. As a tribute, Helterbrand incorporated her mother’s favorite saying, “Your day is what you make it,” into her commencement speech.

Preceding commencement, on Friday, May 18, The Rev. Dr. Jack E. Skiles, gave the baccalaureate address and received an honorary doctorate of divinity from the college. Skiles serves as minister for the First United Church in Bloomington, Indiana.

For more information, contact the Franklin College Office of Marketing and Communications at (317) 738-8185.