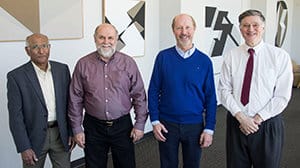 Williams became a member of the Franklin College faculty in 1983. He is the occupant of the Edna B. Lacy Chair in Business and Entrepreneurship. He has received his five-, ten-, fifteen-, twenty-, twenty-five-, thirty and thirty-five-year service awards at Franklin College. He received the Faculty-Staff Academic Advisor Award in 2005. He was the 2009 recipient of the Faculty Distinguished Service Award and the 1990 recipient of the Clifford and Paula Dietz Award for Faculty Excellence.  By a vote of the board of trustees of Franklin College, he will receive emeritus status upon retirement.

Williams earned his bachelor’s, MBA and MAT from Indiana University. He also earned a CFP from the College for Financial Planning in Denver, CO. Williams also has a bachelor’s degree and master’s degree in foreign languages from Indiana University; he speaks Spanish, Dutch and German. Williams is a distinguished musician and songwriter, known throughout the Midwest for his talent playing the euphonium. He has served as president of the board of the Indianapolis Brass Choir, Inc. Williams is a resident of Franklin.

Khatri became a member of the Franklin College faculty in 1989. He is a former department chair for the chemistry department and occupant of the Mildred Mickel Hoover’23 Dean’s Fellow in Chemistry. He has received his five-, ten-, fifteen-, twenty- and twenty-five-year service awards at Franklin College and is the recipient of the 2002 Clifford and Paula Dietz Award for Faculty Excellence. Khatri is also a member of the American Chemical Society and recipient of its Education Division’s Dorothy Passer Award in 2007 for the drug design project.  The board of trustees will vote in May on awarding him emeritus status upon retirement.

Khatri earned his bachelor’s and master’s degrees from the University of Karachi in Pakistan. He earned his doctorate degree in organic chemistry from the University of Nebraska. Over the years, Khatri has presented and published his research. He presented research regarding two proteins associated with cholesterol metabolism disorder at the 46th American Chemical Society Central Regional Meeting, which was later published in Biochemistry, an American Chemical Society academic journal. He has been awarded several grants in the past to upgrade the science department’s equipment and software as well as grants to attend workshops to study topics such as chromatography, spectroscopy and drug design. Khatri is a resident of Avon.

Gawthrop joined the Franklin College faculty in 1992. He has served as division head for social sciences and chair of the department of history and is the current occupant of the Roger D. Branigin Chair in History. He co-authored the College’s Liberal Arts Core Curriculum. He has received his five-, ten-, fifteen-, twenty- and twenty-five-year service awards at Franklin College, the 2004 Faculty Teaching Excellence Award, the 2011 Faculty Excellence in Scholarship Award and has been inducted into the college’s Alpha Society.  By a vote of the board of trustees of Franklin College, he will receive emeritus status upon retirement.

In 1996 he initiated and began teaching the Leadership and Inner City Missions Winter Term class, in which students for the month of January work and live at Christian-based homeless missions in Indianapolis.  The class is often cited by students as the most meaningful class taken by them at Franklin College.  Within the history department, he has taught in German, Russian, East Asian, Middle Eastern, and Latin American history.

Gawthrop earned his bachelor’s degree at Colby College in Waterville, Maine. He earned his master’s and doctorate degree in history at Indiana University. He has received many awards, including an American Philosophical Society research grant, an NEH Travel to Collections grant and a Southern Regional Education Board research grant. His book on German history has been published by Cambridge University Press. He is a resident of Franklin.

Andrews joined the Franklin College faculty in 2001. He is the occupant of the E. Don and Joyce Tull Chair in Business and Management. Andrews has received his five-, ten- and fifteen-year service awards at Franklin College. He established the Fast Track program for accounting students. This program works with community employers to give students a full-semester internship in accounting and serves as a big draw for students to the school’s accounting program.  By a vote of the board of trustees of Franklin College, he will receive emeritus status upon retirement.

Andrews earned his bachelor’s degree from Indiana University and his master’s degree in accounting from the University of Indianapolis. He spent 15 years as an auditor, controller and manager for various businesses and companies. Before coming to Franklin, he taught accounting at Marian College (now University) and was a senior tenured member of the faculty. Andrews has served as both a trustee and a past president of the Indiana CPA Educational Foundation, supporting financial assistance for programs designed to encourage accounting careers. Andrews scholarship of application includes litigation support services which he will continue to offer to attorneys all over the State of Indiana. Andrews is a resident of Franklin.