Employees Recognized for Excellence and Years of Service
Campus News

Franklin College honored two employees with awards of excellence and recognized several employees for milestone years of service at the 24th Annual Employee Appreciation and Holiday Celebration on Friday, Dec. 15.

Ginger George-Nelis, academic technology coordinator for the information technology services department at Franklin College, was recognized as the recipient of the 2017 Margaret A. Hommell Staff Service Excellence Award. 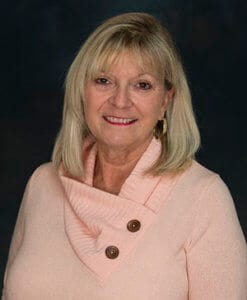 George-Nelis joined the Franklin College staff in 2005. She studied at Indiana Central (now University of Indianapolis). Prior to employment at Franklin College, George-Nelis worked for the Franklin Community School Corporation where she was responsible for resolving classroom issues with technology and training teachers on using technology. She also served as an assistant cheerleading coach for the high school for ten years, retiring in 2012.

George-Nelis was nominated for the award by several members of the Franklin College community. In their submissions they described her as “having a strong devotion to Franklin College and its mission; demonstrating an unparalleled work ethic; being reliable, accessible, visible, honest, kind, competent, generous, reassuring and thorough; consistently approaching her work with a calm demeanor, professional attitude and a willingness to help in every possible situation; and a willingness to be ‘on call’ to work evenings and weekend and to deal with campus members who may be stressed, upset or anxious.” Most importantly, she “moves beyond the issues that arise and finds ways to make operations work efficiently and effectively.”

George-Nelis resides in Franklin with her family. 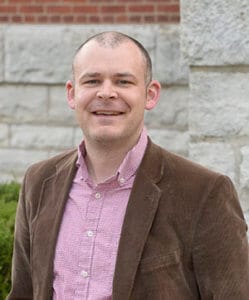 Alexander received his bachelor’s degree in elementary education with a minor in religious studies from Franklin College in 2006. He earned his master’s degree in theological studies from Vanderbilt Divinity School. He is currently a Ph.D. candidate at the Lilly School of Philanthropy at Indiana University-Purdue University Indianapolis.

Alexander returned to Franklin College in 2010 to teach religion. He believes the small class sizes allow professors to focus their time and energy on helping students chart the educational journeys they feel they need to take within religion and/or philosophy.

“Our department is where students go when they want to explore some of life’s most daunting questions,” Alexander said. “Why am I here? What do I believe? Is religion a problem or a solution in today’s world? Where does philosophy end and religion begin? We’ve always prided ourselves not at answering those questions for students, but empowering students to seek out answers on their own while training them to ask even deeper questions.”

Colleague David Carlson, Ph.D., noted in his nomination that Alexander “is so highly respected in our department that we asked him to serve as department chair several years ago despite his adjunct status.  He has led our department in so many positive ways for which we are very grateful. He is one of the many great younger faculty members who are transforming both students and their colleagues.”

Another colleague, Susan Crisafulli, Ph.D., said Alexander “has proven himself to be an accomplished teacher.  His courses are popular and routinely filled to capacity.  As Humanities Division Head, I have had the opportunity to read his student course evaluations, and they are filled with positive comments about his rapport with students, his entertaining demeanor, and his rigorous assessments.  It is clear that Professor Alexander’s students love learning from him and with him.

Alexander resides in Franklin with his family.

The Adjunct Faculty Excellence Award is designed to honor a commendable faculty member who is not in a tenure-track position, has completed two or more semesters and has taught a minimum of 12 credit hours at Franklin College. The award was established in 2012. The recipient receives a $250 cash award and an engraved plaque.

Full-time employees honored for their years of service with the college include the following: