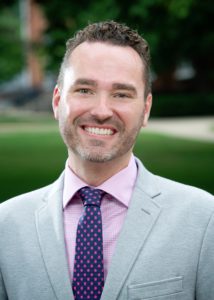 Franklin College has announced the appointment of Andrew B. Jones as its new vice president for campus life and dean of students. Jones began his new role on September 30.

With more than 20 years of higher ed experience, Jones comes to Franklin from Illinois College in Jacksonville, Ill., where he has served as associate provost and dean of student success since 2014.  He also served as the founding director for the college’s Center for Academic Excellence beginning in 2008.  Prior to his time at Illinois College, he worked at Butler University in admission and student support areas.

Jones earned a Bachelor of Music in music education and a Master of Science in education administration from Butler, and a Doctor of Education in higher education and student affairs from Indiana University.

He has spent the last 15 years focused on academic performance, the student experience and student success, living at the intersection of student affairs and academic affairs.  His performance over the years has proven him to be an effective team builder, campus and community leader, and a promoter of innovation and the entrepreneurial spirit.

His areas of interest and research include academic advising, masculinity, first-generation and low-income students and other under-represented populations.

“I could not be more excited to join the Franklin College community,” said Jones. “The combination of an outstanding campus life team and a compelling and engaging curriculum makes Franklin the perfect setting for students to experience a transformative liberal arts education. I can’t wait to be a part of it.”